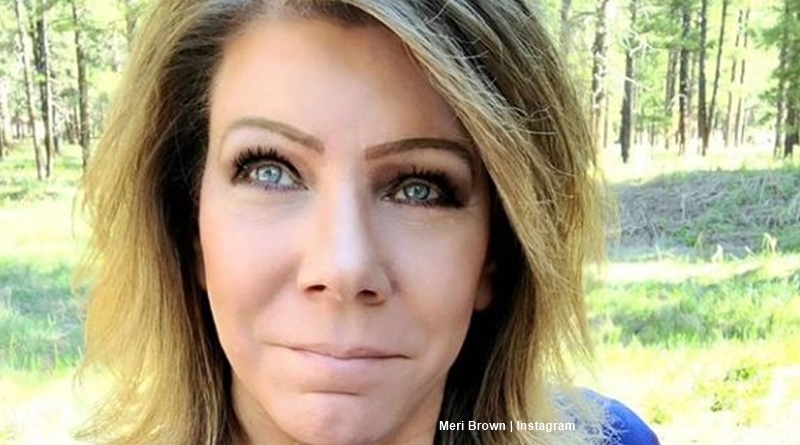 Meri Brown loves nature and often shares photos of herself in the mountains. Or, she shares that the forests make her feel happy. Sometimes, fans see her walking in nature with Mariah’s dog, Mosby. She seems to get a lot of inspiration in the wilderness. Often, her posts are accompanied by inspirational quotes. Last week, she shared a photo of herself in a natural setting and a fan trolled her about her makeup. But, Meri merely shut them down by thanking them.

Meri Brown shared a nice photo but a troll slapped at her makeup.

Meri’s photo showed herself looking very attractive. Obviously, summer comes to Flagstaff in a hurry. The natural setting behind Meri showed patches of shade, sunshine, and new leaves on the trees. She captioned it with a quote by Ralph Waldo Emerson: “Adopt the pace of nature: Her secret is patience.” Meri wore a blue and white top and makeup that emphasized her eyes. Many fans enjoyed the photo and the quote.

However, Meri Brown, like most other reality TV personalities also gets trolls on her Instagram. One troll slapped at Meri about her makeup. They wrote, “Please go somewhere that will teach you the proper way to apply makeup.” They also said that if she looks “attractive,” then she’ll feel “better.” Some fans wonder, “Better from what?” After all, most fans think that Meri Brown looks very happy and at peace with herself in nature.

Troll gets shut down by Meri by thanking them

The Sister Wives star didn’t let the troll get to her. And she shut them down quickly, by replying, “I feel great about myself, but thanks anyway!” Other fans chipped in and defended Meri. Her loyal fans don’t take to trolls very kindly. When another troll also chipped in their thoughts about Meri’s makeup, one fan replied. They noted:

“there are so many positives you can express on IG for example how she’s an independent business woman, symbol of a strong woman, etc. Yet, you zero-in on a physical attribute. This is 2020 and women are more than just makeup and hair.”

Actually, it’s not like Meri Brown headed out to a grand function, after all. Alone in nature, it’s not likely that too many people saw her or even worried about her appearance. Meri seems to enjoy a bit of isolation in a natural setting.

Meri Brown lives apart from the other wives in Flagstaff

Fans of the Sister Wives show know that Meri ended up with a property a bit apart from the other wives. Their property on Coyote Pass comes with a stunning view. But Meri’s a bit away from the rest of them, near some trees. She shared a photo of it on her Instagram last week. People read a lot into that, but it’s quite possible she just loves the idea of nature in her doorstep. On her own out there, she could have just opted to go for a walk with no makeup on at all, after all.

What did you think about a troll looking at a nice picture and finding something horrid to say? Meri’s post includes a positive quote. Yet, the troll opted to zero in on Meri Brown’s makeup. Do you agree there are so many positives they could have talked about? Sound off in the comments below.

Remember to check in with TV Shows Ace often for more news about Meri Brown and the rest of the cast from TLC’s Sister Wives.