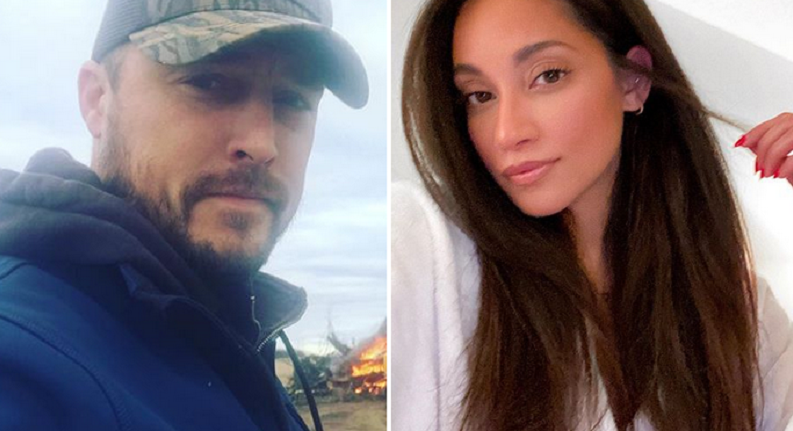 Victoria Fuller and Chris Soules have made their relationship official. Sort of. The rumored couple have dropped not-so subtle hints on their respective Instagram pages. Victoria originally flew down to Iowa to meet up with Kelsey Weier. But she ended up quarantining with Chris Soules on his farm.

It all started when the infamous Bachelor contestant posted a photo of her from his living room. Bachelor Nation recognized the couch and interior design from Chris’ Instagram photos. Her location revealed that she was in the same town as him. Now it looks like they’re dating for real.

Victoria Fuller and Chris Soules made their relationship official. An insider told Us Weekly that they are “exclusively dating.” While Victoria joked that she “escaped” his farm, the anonymous source revealed that she’s back with him. She wanted to visit her friend Kelsey Weier, who lives in Des Moines over the Memorial Day weekend.

But now she’s staying with Chris again. This is the second time that Victoria has stayed with Chris on his farm. The romance rumors first swirled in April when she quarantined with Chris. Us Weekly reported that the 38-year-old “slid into her DMs” and the couple started conversing.

While Victoria F. never shared a photo of herself with the former Bachelor, she confirmed the dating rumors on Monday, April 27 when she shared one of her photos from Chris’ living room. She captioned the photo “Farm life” and tagged her location as Arlington.

Victoria also shared several photos from his house. The couple also shared similar background photos via their Instagram Stories. Bachelor Nation was in shock over their coupling.

Victoria Fuller first left Chris Soules’ Iowa farm after quarantining with the former Bachelor for about a month amid the coronavirus pandemic. The Season 24 contestant joked that she “escaped” his farm to hang out with fellow contestant Kelsey Weier, per Life & Style Magazine.

“I’ve escaped,” the 26-year-old model captioned a selfie on her Instagram Stories. The photo also showed her luggage in the backseat. She followed up with a photo of herself enjoying wine with the 29-year-old. Reality Steve previously reported on his blog that Victoria stayed with the Season 19 leading man back in April after the two followed each other on Instagram.

Polarizing contestant shuts down fan about her rumored romance

The medical sales rep loved teasing her stay at Chris’ house with multiple photos on Instagram. She even made it clear that she was enjoying the “farm life.” One of Victoria’s followers threw some shade about her romance.

“No way will you ever be the farm girl/wife. Nope!” the follower commented. “Too late,” Victoria responded.

While most feel that it’s a random pairing, most members of Bachelor Nation love them together. Ashley Iaconetti told Life & Style that she would love to “double date with them” sometime.

Meanwhile, show host Chris Harrison said that Chris and Victoria’s relationship came “out of the blue,” but he hopes that “they’re happy” in a previous interview with Entertainment Tonight. He also feels that the two are similar due to their controversial pasts.

What are your thoughts on Victoria Fuller and Chris Soules dating? Sound off below in the comments section.