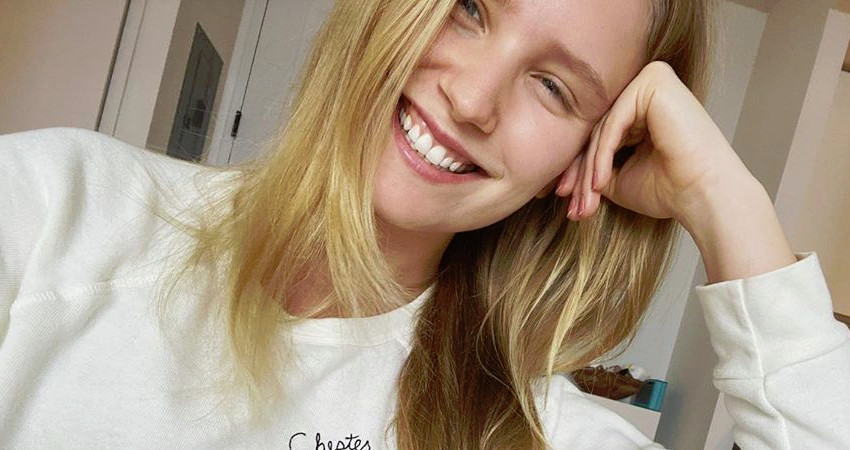 Down with Photoshop! Dancing With The Stars alum Sailor Brinkley-Cook gets real about how seeing ‘perfect’ Instagram photos affects her self-esteem. Guess what, world? Even 21-year-old models get cellulite, she shares.

As fans know, Sailor Brinkley-Cook replaced her supermodel mom, Christie Brinkley, on last season’s Dancing With The Stars. Christie fell during rehearsals and broke her arm before Season 28 even aired.

Sailor stepped in to fill her mom’s dancing shoes. However, she was eliminated in the show’s sixth week. If you don’t recall, fans kept ‘saving’ Sean Spicer elimination, despite his low scores,  per TV Shows Ace.

The model was one of several DWTS Season 28 contestants involved in the Live Tour of 2020. The tour was abruptly postponed in March due to the coronavirus pandemic. ABC has yet to announce any news about when the tour will be back on.

Sailor paid tribute to her tour companions on Instagram when the postponement was announced. She called the tour “one of the coolest things” she’s ever done.

Thank you to these incredible people and every person on the crew at @dwtslivetour for this once in a lifetime experience and one of the coolest things i’ve ever been a momentary part of. I’m so grateful for every minute of it! ❤️ I wish this awesome tour could’ve continued on, but c’est la vie. Now everyone should focus on their health and their fellow mans health. Wash your hands, help out your elderly neighbor, be safe & mindful, and stay calm. Much love 😊

She’s been in quarantine pretty much since the tour ended. Sailor’s doing a lot of self-reflecting these days.

Sailor Brinkley-Cook Reveals She’s Been Feeling ‘Down’ About Her Body, Slams Photoshop

In a vulnerable social media post over the weekend, Sailor gets candid about her body issues. She reveals that she compares herself to “perfect” girls on Instagram with “tiny little waists” and chopstick thighs.

“I’m so f**king sick and tired of the Photoshop,” she begins. She opens up about “feeling so down” on herself lately. Sailor admits that she’s been “crying” over her cellulite and “getting mad” with herself because she’s not as thin as she once was.

Sailor reveals that her body issues are rising to the surface, including “body dysmorphia” and “eating disorder tendencies.”

She notes that as a young woman, her body “shifts and changes” monthly and she can no longer control it. Sailor admits that she compares her body with the “perfect” photos she sees on Instagram. Even though she knows that an app on her phone shouldn’t dictate how she feels about her own body, E! News reports.

‘I Have Cellulite and a Stomach,’ the DWTS Alum Declares

What started as a rant against photoshop turns into a body-positive appraisal of her own body. She writes that she’s “so f**king LUCKY to have two legs” and her health. She reveals that she’s “tired” of being ashamed of her body. As a result, she decides to share some hard truths about her body on Instagram.

“I have cellulite,” she informs her followers. Furthermore, she has a “stomach that doesn’t’ always look ‘pleasant.’” (“Whatever the f**k that means.”)

Sailor says she is an imperfect human, just like everyone else.

I’m so fucking sick and tired of the photoshop 👏🏼 I’ve been so down on myself recently. Crying about my cellulite, letting the fat on my body ruin my day, getting mad that i’m not as skinny as i once was. The body dysmorphia and left over eating disorder tendencies have been coming in strong. As i come into myself as a young woman my body shifts and changes by the month, the “control” i felt i once had over it has been completely stripped away from me. Hormones, emotions, growing pains. I go on instagram and scroll through photos of girls that look “perfect”.. shiny skin with not a bump to be seen, tiny little waist and thighs that look like chopsticks. And i compare myself, as if how someone on an app on my phone looks should directly correlate to how I feel about my body? What I’ve learned is that I run every day. I go to the gym 6 times a week. I fuel my body with beautiful food. I am so fucking LUCKY to have two legs and a healthy body that takes me through life. I’m so tired of thinking anything that makes up ME is something to be ashamed of. So as most 21st century girls would do, I’m putting this out there on instagram. Declaring that I have cellulite, and a stomach that doesn’t always look “pleasant” (whatever the fuck that means) and I am 100% imperfect human. And I’m proud as hell of my body! If you’re out there hating on yourself, stop!! Appreciate yourself. You’re body is so magical. That’s all. Have a nice day. 😌

The DWTS contestant ends her post by encouraging her followers to embrace their bodies. She writes, “I’m proud as hell of my body,” telling fans to “appreciate yourselves”

Tell us in the comments your thoughts on Sailor’s body-positive post.

Dancing With The Stars usually returns to ABC this fall, but the coronavirus shutdown has television schedules up in the air. Check back with TV Shows Ace for filming and casting updates for DWTS and your other favorite shows. See Sailor’s full post below.

Todd Chrisley FINALLY Meets His Match: A Store With Nothing To Buy
Jackson Roloff Puts His Big Brother Skills On Display: See Sweet Photo
’LPBW’: Audrey Roloff Gets Lost In Her Feelings Over This Picture
Erika Jayne Compares Herself To ‘Street Fighter’ Character Chun-Li
Dale Moss Settles Marriage Rumors Once & For All