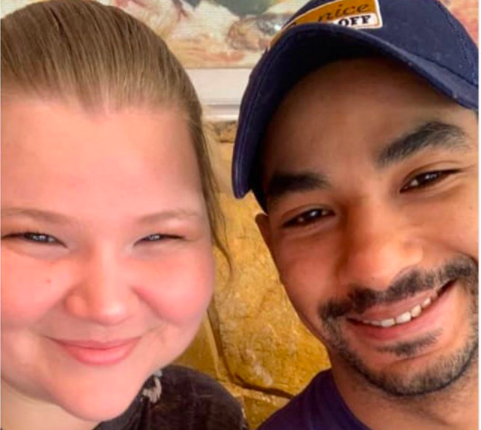 90 Day Fiancé star Nicole Nafziger has been spending all of her time quarantined with her finacé Azan Tefou (Hassan M’Raouni). The pair are together in Morocco, yet they are still no closer to being married. Despite the lack of wedding bells, Nicole seems to be enjoying her staycation with her man. According to InTouch Weekly, Nicole posted on social media sharing a photo of a home-cooked meal Azan cooked for her.

Nicole captioned her Instagram story photo as “My delicious meal by my babe.” The dish appears to be made up of chicken, rice, peppers, and broccoli.

The meal Azan made her looked to be very healthy. This meal just might be another part of the star’s fitness journey. Nicole’s weight has always been a hot topic for the couple. It is even a center of occasional tension between the pair on the show. Azan has mentioned wishing she would lose weight before. And he just might be attempting to influence her diet while she is under the same roof as him. Nicole and Azan are definitely getting more quality time then they bargained for.

Where has the 90 Day Finacé star been?

Nicole originally went to visit Azan back in March for what was supposed to be about a two-week trip, but it has since turned into two months and counting since the coronavirus pandemic hit. During the majority of her stay so far the 90 Day Fiancé star decided to take a break from using social media. She just returned to Instagram in mid-May. But her sudden lack of posts did cause some worry from some fans, especially since her daughter May is back in Florida with her mother, Robbalee.

Some fans, or rather trolls, leave disgruntled comments on Nicole’s posts. They bluntly ask her why she is not with her daughter. One commenter said, “How are you not ashamed! Leaving your Child like that.” Another user chimed in, “wheres your daughter? shouldn’t she be first priority 🤷‍♀️.”

InTouch went on to report that her family is not so happy with Nicole spending these last few months abroad.

An insider spoke with InTouch back in April saying, “[Nicole’s] family isn’t so thrilled that she’s stuck there or even went to go visit him in the first place, but they understand that she’s an adult and can make her own decisions…She knows how her family feels about Azan but chooses to follow her feelings over theirs.

What do you think of the 90 Day Fiancé stars situation during this difficult time? Let us know what you think in the comments below. Be sure to watch new episodes of 90 Day Fiancé on TLC.