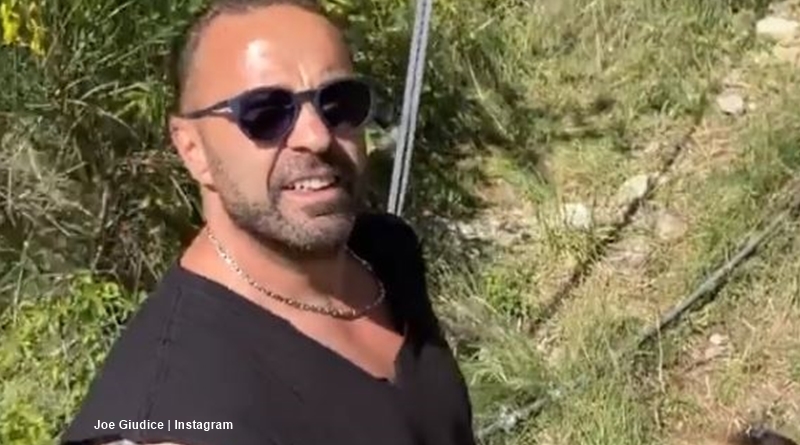 RHONJ star Joe Giudice lost a lot of weight in prison. Since he lives in Italy, he walks for miles every day. Plus, he works out. With no gym available, he shares video clips of himself lifting rocks and other heavy objects. Despite that, he still gets some body-shamers as he bulks up a bit. But now, it seems he feels ready for a fight. In fact, he participates in a celebrity boxing match in October this year.

TV Shows Ace reported that Joe got angry with body shamers who talked about how he picks up some weight again. The Real Housewives of New Jersey star took to his Instagram in March and told them off. Joe wrote, “Breaking news! I gained weight! I don’t need rude and subtle remarks on my body cause I am 😃. ”  Plus, he went on about how trolling and haters are just plain unacceptable during the coronavirus.

The RHONJ star then reminded people that nobody should shame anyone for their “body, their color, or their size,” especially on his own page. He ended by telling critics to “take this time to reflect and hope you evolve and become a better human for yourself, kids, and the [world].” But now it seems he probably gained some weight deliberately, as he just signed up for a celebrity boxing match. TMZ reported that they spoke to “Celebrity Boxing promoter Damon Feldman.”

Joe’s opponent not known yet

Damon said that the opponent who fights aginst Joe Giudice isn’t yet known. The “Pay-Per-View” subscriptions will decide how much Joe earns for his fight. Actually, he looks really strong these days. And, those guys he hangs out with in Italy probably know a trick or two about boxing. In the fight, Joe will take on whoever challenges him in three rounds. The rounds last for 1 minute and 30 seconds each.

Real Housewives of New Jersey fans know that Joe probably harbors some anger right now. He fought and lost his appeals against his deportation to Italy. Now, he lives far away and can’t even see his daughters because of the coronavirus. Plus, he and Teresa separated. Joe said on his Instagram that his trainer’s “Uncle Tony.” His workouts might look primitive, but the RHONJ star certainly looks quite built these days, fans think.

One critic trolled on Joe saying that he looks terrible and doesn’t know how to train properly. So, one follower suggested they put up their hand up for the celebrity boxing fight against the RHONJ star. Who do you think Joe might end up fighting? Sound off in the comments below.

‘Below Deck Mediterranean’ Season 6: Release Date, How To Watch
‘Bringing Up Bates’ Season 10 Finale Details Revealed: When Does It Air?
WOAH! Savannah Chrisley’s Legs Are As Smooth As A Baby’s Bottom
Khloe Kardashian & Tristan Thompson Split: Are They Over For Good?
Take A Peek Inside Jinger & Jeremy Vuolo’s Wild Saturday Nights