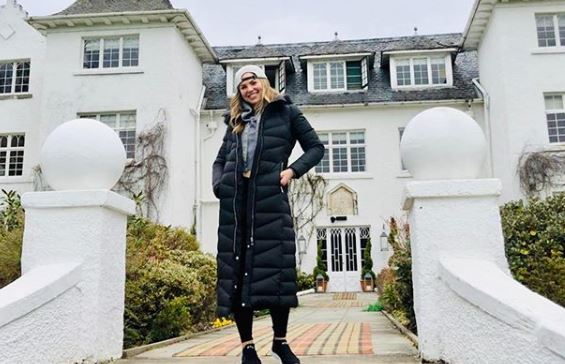 The Bachelorette alum Hannah Brown is under heavy fire after accidentally saying the “N-word” while singing a song during a recent Instagram Live. TV Shows Ace actually has the video.

Hannah Brown has been a hot topic in Bachelor Nation communities since Sunday night. Unfortunately, a lot of those discussing what happened never actually watched the video. So, this has a lot of people questioning whether Hannah Brown actually said the “N-word”? Are people blowing this out of proportion? Did they hear something they did not actually hear? Was it just the song in the background that said the word? Did someone else in the room say the word?

There are a lot of questions that swirl. Beyond whether Hannah Brown actually said the “N-word…” Some also question if her singing the word was actually doing something wrong. After all, she was just singing a song. A song that happened to have the “N-word” in the lyrics. Did that really make her the bad guy? Some people certainly didn’t think so.

Others, however, insisted she shouldn’t be comfortable with saying the word at all. Ever. Even if the word is part of a song. These same individuals argue the fact that she claims she said it without even realizing it just makes the whole thing worse.

The reality TV star shrugged it off and blamed others.

During the Instagram Live, several people called her out for saying the “N-word.” Initially, she didn’t believe she actually said it. While she did apologize saying she was “so sorry…” Fans were not feeling the apology. After all, Hannah was all smiles and giggling while she apologized. And, she continued to maintain she did not believe she said the word.

Hannah Brown also had a friend in the background who was quick to pass the buck. The individual insisted it was someone else in the room who actually said the word.

Taking the olive branch her friend offered, Hannah Brown also tried to pass the blame. She, however, claimed it might have been her brother Patrick Brown who actually said it.

Naturally, passing the blame around the room only caused more issues. It made many question if her entire circle of friends and family members were just comfortable using the word.

Check out the actual video footage of her saying the ‘N-word’ below.

About two minutes into the video below Hannah Brown sings the ‘n-word’. The video has been censored. But, it is still clear she says the word.

In the commentary at the beginning of the video, we reveal that Hannah Brown appeared to hesitate and pause right after singing the “N-word”. In the moment, it seemed clear she knew she messed up. It, however, seemed as if she was hoping no one would notice.

Don’t take our word for it… Watch the video above of Hannah Brown saying the “N-word” and see what you think. Share your thoughts with us down below in the comments.