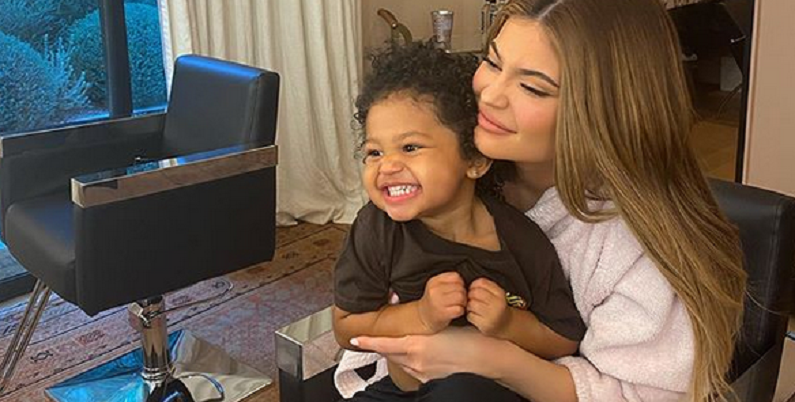 Kylie Jenner just confirmed that she’s quarantining with her ex-boyfriend Travis Scott. The couple split back in October 2019. Since then, Kylie and Travis have worked to be successful co-parents for their daughter, Stormi. Since the stay-at-home order is still in effect, the two have been spending time together.

But does that mean they’re back together? The couple appears to be on-and-off as they navigate their relationship. Kylie dropped a major hint on social media last week that they aren’t back together. She no longer has a picture of them in her walk-in closet, as seen in her Instagram Story.

Travis Scott and Kylie Jenner quarantine together with their daughter Stormi

As per Billboard, the couple was spotted at Kylie Jenner’s Holmby Hills mansion, which she just purchased last week for a cool $36.5 million. Kylie and Travis spent some time with their daughter Stormi. Kylie took to her Instagram Stories to share a clip of her with Travis posing as their daughter enjoys her ice cream.

Check out the video of Kylie and Travis in the video below.

She also posted an emotional message on his birthday on her Instagram account. “DADA happy birthday to daddy of the year,” she wrote. “I’m slowly but surely starting to accept the fact that storm is a daddy’s girl but whatever. we went half on greatness! the most beautiful, smart, loving and funny little baby. the best gift. ok i’m crying. Love you forever!”

Are Kylie Jenner and Travis Scott back together?

The couple previously ended their relationship after two years of dating. Back in March, several reports suggested that the couple rekindled their romance. They were spotted on several sightings. However, Kylie’s nephew, Mason Disick, quashed the rumors during an Instagram Live chat. Mason’s parents later deleted the 10-year-old’s social media account.

DADA 🤍 happy birthday to daddy of the year! i’m slowly but surely starting to accept the fact that storm is a daddy’s girl. 😫 but whatever. we went half on greatness! the most beautiful, smart, loving and funny little baby. the best gift. ok i’m crying. love you forever! @travisscott

An insider told Us Weekly back in February that the couple is focused on coparenting their daughter. They’re also working on their relationship status. Kylie and Travis don’t plan to announce when they’re back together. They want to keep it to themselves for the time being.

Stormi may be a “daddy’s girl,” but she sure looks like her mom. As per Us Weekly, Kylie took to Instagram to prove that she and her 2-year-old daughter bear a striking resemblance to each other. She posted this side-by-side photo comparison of them. The 22-year-old posted a throwback photo of herself wearing pigtails next to a photo of Stormi with a bow in her hair.

i love these😍 [KYLIE REPOSTED ON HER STORY]

Both girls make the same expression. The photos also highlight the duo’s similar features. Kylie commented on their family resemblance in the past.

Back in August 2018, she shared a photo with her then 6-month-old daughter, which led fans to comment on their similar looks. The Kylie Cosmetics founder made a compilation of pictures on her Instagram Story, captioning it, “My twinny.”

No matter what, Stormi and Kylie Jenner have a close mother-daughter bond.