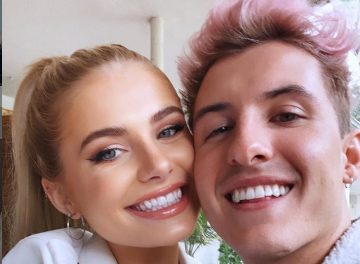 Bachelor in Paradise fans were really pulling for Demi Burnett and Kristian Haggerty. As the first same-sex couple on the show, they made history. The two had started to date before Demi left to go film in paradise. Haggerty eventually joined Demi on the show and by the end she proposed to her.

When on the Almost Famous podcast with Ashley Iaconetti and Ben Higgins she addressed the relationship ending. When asked if she would have gotten engaged if they hadn’t gone on BIP, Demi had a certain answer. Demi answered with a definitive, “definitely not.” She said when it came to what went wrong, she kept trying, but she wasn’t feeling it anymore. Burnett said, “I wanted to be with her more than anything and I kept trying and I kept trying.”

What Went Wrong For Demi Burnett After The Show?

Demi Burnett and Kristian have both moved on since the breakup. Burnett is with Slater Davis, a musician while Kristian is with Taylor Blake from Reality House. Demi said that Haggerty was, “the best partner to be with,” but she eventually grew distant, according to People.

She said, “she would do anything for you, and I didn’t reciprocate that. I wasn’t as good to her as she was to me and was kind of distant. I was overwhelmed, I was freaked out.” She also said some of her family members didn’t support the relationship and she felt guilty about not being good to her. Burnett admitted she wasn’t ready for what she’d signed up for. She does feel bad about the way their relationship ended.

Demi talked about those regrets on the podcast. She said, “I wish I could go back and do it better. Treat her way better. Like she deserves, because she deserves way better than what I gave her.” Kristian is happy in a new relationship, and Demi is happy for her.

Was She Mad At Kristian For Re-proposing At The Reunion?

Demi Burnett also said she was mad when Haggerty proposed to her at the Bachelor in Paradise reunion. She said, “it definitely made me angry. I’m a selfish person sometimes, and that was my thing, you know: ‘I proposed to you.’” Demi also didn’t like the ring and attributed her attitude towards starting to distance herself from the relationship. She said, “once you start not to feel it with somebody, you kind of get irritable with everything they do.” Demi said she was being bratty about everything.

She said she felt bad about that as well because it was a really nice gesture. Demi said she shouldn’t have made her feel bad about doing it because that wasn’t fair. Fans are rooting for both of them that their new romances bring them the love and happiness they’ve been looking for.