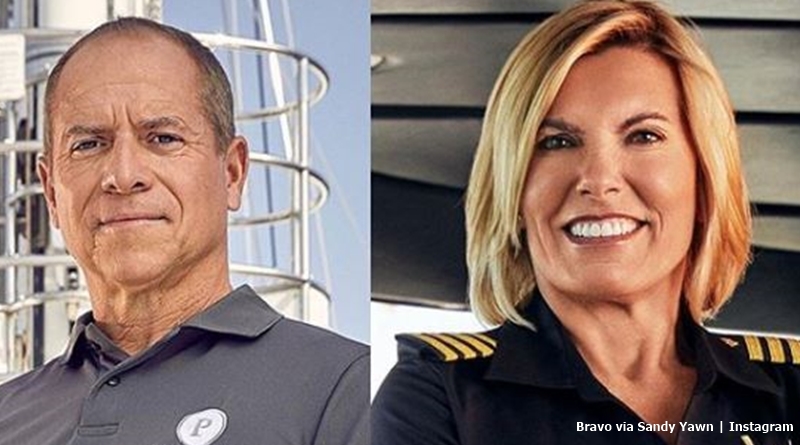 Below Deck on Bravo’s very popular with viewers. And, Sailing Yacht also garnered plenty of fans. The current season of that show brings the focus on Madison Stalker who nearly got fired by Captain Glenn in season 1. Now, he and Captain Sandy Yawn will feature on in an Instagram live next week.

Captain Sandy Yawn took to her Instagram on Friday and revealed the upcoming Live. The poster for the Live features her and Captain Glenn, both looking very smart in their uniforms. Sandy captioned with, “It’s happening! I can’t wait to hang with Captain Glen and talk about all things belowdeckmed & belowdecksailing!” She invited fans to “join” them and  “ask questions.” She promised to dish the “real story.”

Well, as it includes Below Deck, Below Deck Sailing Yacht, and Below Deck Mediterranean, expect a lot of interest from fans. Fans already heard from Sandy that Mediterranean Season 5 features an all-female top management crew. Sandy gave a special pre-season tour of “The Wellington.” TV Shows Ace reported that she “shared a 3-D tour on Twitter.” The vessel has an incredible luxury that includes a VIP lounge, marble tiles, and a cigar room.

Captain Glenn won’t feature in Mediterranean, but fans hear from him on the Live

The all-female management crew on the upcoming show includes Captain Sandy,  Chief Stew, Hannah Ferrier, and Bosun Malia White. Obviously Captain Glenn won’t feature in that season of the franchise. But, fans can hear him talk on the Live with Bravo. Perhaps he mentions the time he nearly fired Madison Stalker. It came when chief stew Jenna and Captain Glenn chatted about Madison’s alleged misconduct.

Below Deck: Sailing Yacht sees a rather”unprofessional” romance going on between Jenna and Adam Glick. So, in her interview with Decider on the incident, Madison felt it’s a bit off for her to talk about professionalism! Actually, the fans of the show don’t particularly like what goes on between Jenna and Glick at all. And, as a result, pretty much Madison became a fan-favorite. Maybe, Captain Glenn will one day appreciate that Madison does put in long hours.

Actually, as Captain Yawn said, fans can ask questions, so perhaps some of Madison’s fans rock up and put Captain Glenn in the hot seat. Still, what people see in reality TV and what actually goes on might differ from each other. Sandy Yawn of Below Deck promised fans they can find out the “real story” on the Bravo Live. It takes place on May 4 at 2.00 PM, ET. Already, many fans say they bookmarked the time and promised to be there for it.

Remember to check back with TV Shows Ace often for more news about Bravo’s Below Deck franchise.