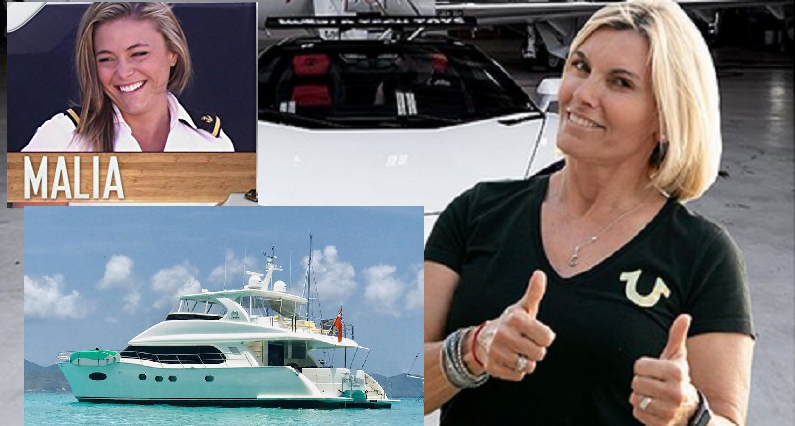 After the disappointment that was Below Deck Season 7, the spinoff series wants to make history. Below Deck Mediterranean Season 5 features an all-women crew. It’s the very first time there’s a female leader in each department of the luxury yacht. Captain Sandy Yawn returns at the helm while Hannah Ferrier returns as chief stew.

For the first time in the show’s history, the deck team will have a woman as bosun. Malia White makes her big return to the series. This comes as no surprise since she showed her hard work and dedication in Season 2. She was also infamously involved in a love triangle with chef Adam Glick. The cast will set sea on the coast of Mallorca, Spain, which makes for a beautiful backdrop for a stressful season.

Captain Sandy Yawn and Hannah Ferrier started off last season with Yawn saying that Ferrier’s heart wasn’t in it anymore. The complicated duo made up once again. But it could be Ferrier’s last season. According to the trailer released by People, Yawn sounds frustrated with Ferrier. She’s heard saying, “I could have fired you a long time ago, Hannah. I could have fired you last year or the year before.”

Ferrier also experiences tension with her two new stews. “Don’t touch me,” Ferrier is heard pointing at one of her stews. Both stews, Lara Flumiana and Jessica More, aren’t backing down without a fight. “The more you p*** me off, the less I will do,” Flumiana threatens Ferrier. “Get your s*** together and be nice.”

Meanwhile, White is having a hard time maintaining authority over her male deck team. She expresses disgust over being called “sweetheart” by one of her crew members. “You’ve got a female bosun, a female captain and a female chief stew,” White says to one of her deckhands. “Respect that.”

Malia White has a new love in her life

Below Deck fans witnessed White promoted to lead deckhand in Season 2. She’s slowly climbing up the ranks. Unfortunately, White’s work ethic was overshadowed by her love triangle with Glick and bosun Wesley Walton.

Glick and White hooked up prior to filming Below Deck Mediterranean Season 2. They kept their romance a secret from the cast and producers. However, all was revealed when Glick fell hard for White. He revealed to producers and viewers that he and White knew each other before the season started.

While White chose Walton, the couple later split. She recently celebrated her “favorite person” this past October. White posted the following photo of the person who she refers to as her “favorite” and says is a “keeper.”

According to Showbiz Cheat Sheet, White is dating chef Tom Checketts. She’s aware that she had a penchant for yacht chefs. But what makes Checketts different is that they work as a “team” together. The couple also travels around the world together, as evidenced by their respective Instagram accounts.

Below Deck fans will have to wait a while

What are your thoughts on the Below Deck Mediterranean Season 5 trailer? Sound off below in the comments section.