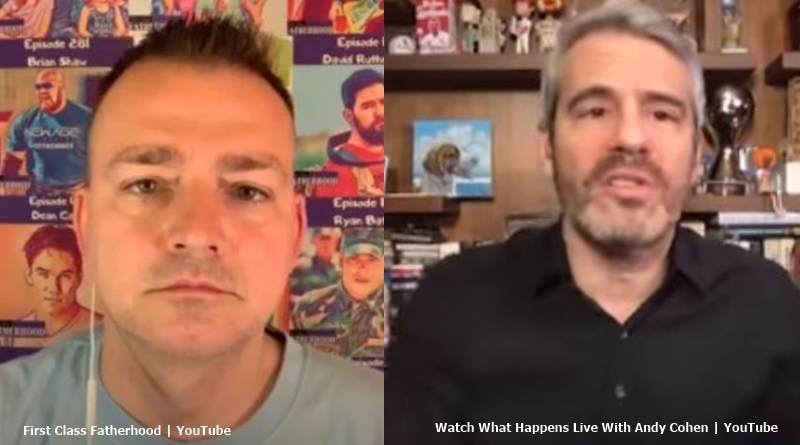 First Class Fatherhood‘s rapidly growing into a very popular podcast. Run by Alec Lace, he hosts many celebrities these days. Mostly, the talks revolve around parenting, grandparenting, and other family aspects of their lives. Recently he hosted Matt Rolff from TLC’s Little People, Big World, and Jon Gosselin. In fact, even Tom Brady appeared on his podcast. Now, Alex reached out and invited Andy Cohen to feature.

Alec Lace, who also wrote First Class Fatherhood the Children’s Book, recently talked with NFL Linebacker, Brandon Copeland. Another famous name who chatted with Alec is “Tyler Hilton…actor, singer, and songwriter.” Plus, Alec also spoke with Derick Dillard, Ryan Harris, Dan Abrams, Nick Ayers. Adam Busby, and many more. Hopefully, with Andy Cohen now a father, and a massive celeb with millions of followers, he can persuade Andy to speak on the podcast.

The invite to Andy Cohen came on a post that Andy put up on Instagram this weekend. Sweetly, it showed him with his son Ben. Andy wore a tie-dyed looking sweat outfit and Ben wore his cute little jammies. Holding his dad’s hand, Ben looked up at Andy. Andy suggested that Ben thinks his dad’s “weird.” Apart from Alec from First Class Fatherhood, many other fans commented on the cute photo. Jokingly, one suggested that “All kids think their parents are weird.” Meanwhile, another one quipped that little Ben’s “right.”

Andy might be able to talk surrogacy with Alec Lace

Andy Cohen could bring a long and interesting conversation to the table. Alex commented, “I’d love to have you on my podcast, First Class Fatherhood for a few minutes to talk about Dad Life.” Next, he assured Andy that they need not meet face to face. In fact, its only “15 minutes by phone.” Then he listed some of the previous guests as “Deion Sanders, Kurt Warner, Dana White, Tony Hawk, Tom Brady,” and more. Finally, Alec asked Andy to “please consider!”

As a famous dad, and a single father, Andy could bring a lot of interesting insights into parenting to followers of First Class Fatherhood. Bear in mind, the Bravo host also helped campaign for surrogacy. In fact, earlier this month, he gave a huge shoutout to Governor Cuomo who helps ease laws on that. Fans of Andy Cohen know that Ben was born via surrogacy. Actually, the little boy now garners loads of his own fans. No doubt, fans would enjoy hearing more about that. And, perhaps they could get a followup on whether Andy plans to raise any more children. Of course, just chatting about his busy lifestyle and the quality time he and Ben spend together could be very interesting as well.

What do you think about Alec Lace inviting Andy Cohen to chat on his First Class Fatherhood podcast? Do you hope Andy takes him up on that offer? Sound off your thoughts in the comments below.

Remember to check back often with TV Shows Ace for more news about Andy Cohen.