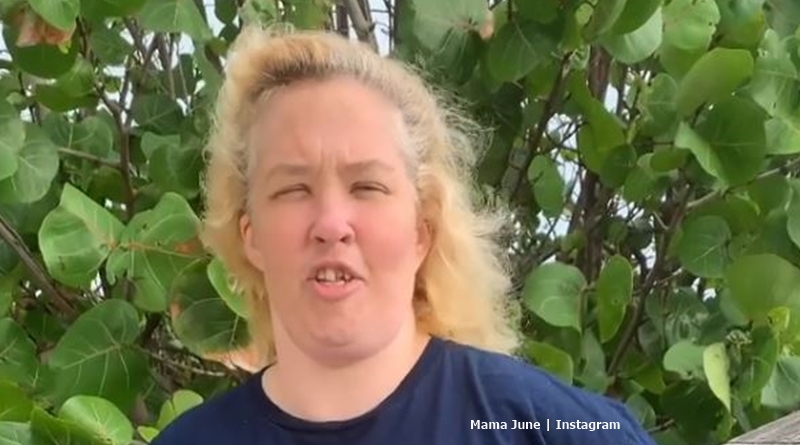 Mama June fans see that she’s been really quite active on social media since the new season of Not To Hot: Family Crisis premiered. More often these days, she pushes her Cameo platform where she does shoutouts at $30 a pop. But one of her promo vids for that showed her using an awful lot of swear words, looking disheveled, and slurring. Now, she went on Instagram and promised her fans a big surprise this week. But, few of them seemed impressed.

Mama June on Cameo – racks up the reviews quickly

TV Shows Ace reported that Pumpkin and her sister Alana followed June onto cameo. June does quite well and even sold one that Wendy Willaims’ team requested. Charging $30 a pop, she’s making a decent bit of cash off it. Recently, she shared a new promo for her Cameo page. It called for birthday shoutouts and that sort of thing. But, another one she shared seemed a bit alarming, The Sun UK noted this weekend. The one that The Sun saw revealed June looked rather under the weather and used many expletives. The one up on Cameo at the moment’s a lot tamer.

The outlet reported that Mama June’s Instagram promo for Cameo showed her missing tooth. Plus, “she also struggles to keep her eyes open and center the camera on her face.” They noted that June never held back on the bad language either. She said, “If you’re wanting to tell one of your friends or one of your exes to f**k the hell off or tell someone look cheer up during this coronavirus… happy anniversary, happy birthday… just want to tell somebody you f**king miss her loving face, hit me up.” Well, that’s old-school June with zero class, some people think.

June promises her skeptical fans something new this week

On Sunday night, June looked a bit revived in a new post she put up on her Instagram. In that post, she made a promise. In her video clip, Mama June said, “I decided to make something very special for my fans.” She then went on and said that fans should keep a special lookout for something and they’ll “get it soon.” Fans that follow June express their concern for her. But, others grow angry with her over her estrangement from Alana and her obvious fall from grace. Mama June took a swan dive into a lifestyle of gambling and hanging out in motels.

Many Mama June any fans suspect she uses drugs after she and Geno got arrested for possession of paraphernalia last year. In response to her promise of something new, many of them expressed their skepticism. One said, “You are losing fans. Get back with your kids!” Meanwhile, another one slammed her, saying, “How much money have you SMOKED up? How f–king sad that you have a family that loves you and wants you to get clean and leave that LEECH Geno who doesn’t give a rats *ss about you!!!”

Many people simply don’t understand June. After all, she turned her back on Alana for Geno. Then she lived out of hotels and racked up debt. Plus, she gambled a lot. Meanwhile, fans watched her kid crying about her mama. And June sailed back onto social media like nothing ever happened.  So, fans don’t want anything from June. They just want her to sort her life out. One fan noted, “The only gift I want is for you to go home to your kids and get rid of that POS you’re with.”

Big Surprise coming this THURSDAY for my fans!! Can’t wait to share it with y’all! ♥️

Do you agree that June should rather focus on making things right with her family? Would you prefer seeing her make a concerted effort to address her issues rather than touting “something” as a gift? Sound off your thoughts in the comments below.