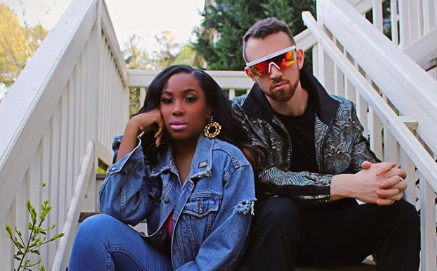 Cameron Hamilton and Lauren Speed were the awkward but cute couple the world didn’t know they needed. They went from Love Is Blind to Hanging with the Hamiltons. They now have started a YouTube channel documenting their quarantine time and likening it to time in the pods.

Recently they had an interview with Entertainment Tonight and talked about hanging out with Idris Elba. Cameron as people saw on the show is a talented rapper scientist. Those are things you might not think goes together, but it works. In one of their videos Lauren walks in on Cameron doing a secret project involving clones. It’s fun. They filmed the video like an episode of the office.

Happy Easter everyone! We took this around Easter last year. Easter means a lot to me because of what it represents: rebirth, overcoming, new life, new beginnings, the coming together of people to celebrate life. Even though we are separated physically from our families this Easter, I am thankful that we can still connect.

What Did Cameron Hamilton Do When He Met Idris Elba?

Cameron Hamilton was surprised to hear from Idris and learn along with his wife, the actor had created a platform. It was to help couples and they wanted him and Lauren to be on their first show. Lauren said, his wife, Sabrina reached out to them. She gushed, “And they’re just the most gorgeous couple. Just looking at them, they’re like drop-dead gorgeous, even through the camera. But they also have really beautiful hearts and spirits.” She said their down to earth vibe was totally on point with her and Cameron’s vibe.

Cameron said the couple, “made us feel very welcomed right off the bat. You never know what to expect from someone who’s on such a high platform. But they were super welcoming and, I mean, I could see us hanging out with them.” Of course, they had to have a rap battle. Idris and Sabrina had both tested positive for the coronavirus and were self-isolating. Lauren said they both were lucky to have mild cases and were happy to be doing well. They knew some people were having a very hard time with it.

How Did The Rap Battle Go For Cameron And Idris?

Cameron Hamilton and Idris Elba reportedly blew their fans away with their rap battle. Cameron said in the interview, “we are already virtually kind of laying down the tracks, the beats, everything. He said soon they’ll put out a track together.

Fans of the couple have been receptive to their YouTube channel with one commenter saying, “God made Cameron Hamilton with Lauren Speed in mind.” The couple seems really happy, living together and making content. It’s just what their Love is Blind fans want to see while they’re stuck inside.