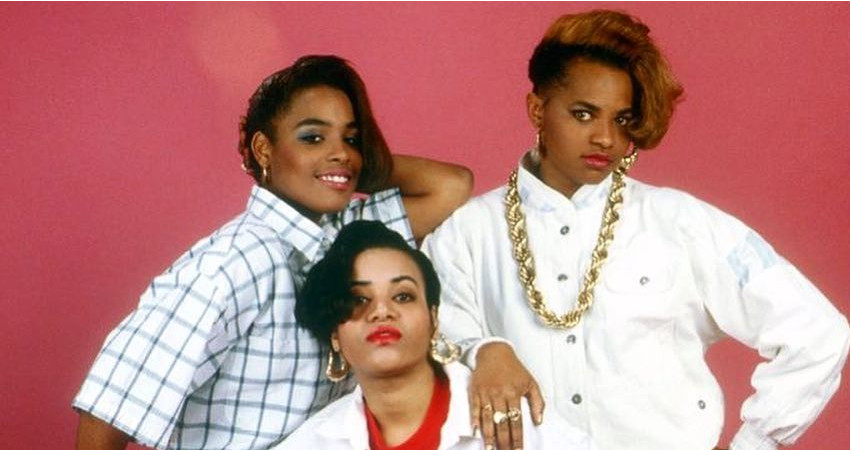 Viewers watching Lifetime’s The Clark Sisters: First Ladies of Gospel this weekend got a much-needed surprise. The network known for adapting notable pop culture icons into biopics is at it again.

The trailer for the upcoming true story about hip-hop group Salt-n-Pepa premiered. Fans took to Twitter to express their delight and concerns.

Salt-n-Pepa consists of Cheryl “Salt” James amd Sandra “Pepa” Denton. “DJ Spinderella,” Deidra Roper accompanies the duo. The “First Ladies of Hip Hop” rose to fame in the 80s with their song Push It. They continued to release new music into the 90s with songs such as Shoop and Whatta Man.

However, their real-life drama took center stage in the late 90s. They cut ties with their manager, Hurby Azor, whom “Salt” was romantically involved with. “Pepa” briefly married Naughty by Nature’s Treach.

The group took a five-year hiatus in 2002. They reunited for a reality show on VH-1, The Salt-n-Pepa Show. “Spinderella” made appearances on the show, but it was mostly about “Salt” and “Pepa” working through their past issues.

In 2017-18 the trio toured on the I Love the 90s tour. New Kids on the Block announced in 2019 that Salt-n-Pepa would be joining their Mixtape Tour. However, shortly before the tour began, “Spinderella” announced that she was “terminated” from the trio.

“I'm deeply saddened to share with all the #SaltnPepa and #Spinderella fans that I will not be performing on the #NKOTB Mixtape Tour. Despite my participation in promoting the tour and being highly publicized as one of the acts, in January 2019 I received a ‘termination’ email from #SaltnPepa excluding me from performances with the group. It was my expectation, after making that decision, that they would also take responsibility for sharing the news with the public and other affected parties. It has been months now with no mention. Out of love for my fans and a commitment to upholding a standard of professionalism, I've taken it upon myself to let everyone know. I refuse to participate in misleading fans, ticketholders, and others who — based on all the advertising — were anticipating seeing the iconic #SaltnPepa and #Spinderella trio. So, I'm making it clear now. Please know you will have the opportunity to see me this summer in many other projects and activities I'll be participating in and I look forward to seeing you all then.” Thank you, Spinderella 😘

A breach of contract lawsuit filed by “Spinderella” against her former bandmates is still ongoing.

During Saturday’s movie on Lifetime, the first trailer for the upcoming biopic about the group aired, Entertainment Tonight reports. The movie stars GG Townson as “Salt” and Laila Odom as “Pepa.” Both Cheryl and Sandra serve as executive producers.

According to ET, the movie follows the rappers from nursing school to worldwide fame. ET writes,

The fan reaction on Twitter led to #SaltnPepa appears as a trending topic on the social media site for Saturday, April 11. The reactions were mixed. Many fans took issue with neither of the lead actresses looking like their respective real-life counterparts.

Them girls look nothing like Salt N Pepa. Who casted this? pic.twitter.com/FbeNXEFxnI

However, casting actors who look nothing alike is a Lifetime staple. Most notably, actress Amanda Fuller in The Brittany Murphy Story. And the entire The Unauthorized Saved by the Bell Movie cast.

Other fans wonder if “Spinderella” is in the movie. However, for the most part, though, fans were beyond excited for the upcoming biopic.

Tell us in the comments if you’ll be watching the Salt-n-Pepa movie.

The movie will air sometime in 2020 on Lifetime. A release date isn’t available yet. Check back with TV Shows Ace for updates on the Salt-n-Pepa biopic. In the meantime, check out Lifetime Movies archive.

Did Todd Chrisley Just Call His Daughter Lindsie Toxic?!
Love In The Afternoon With Hallmark’s ‘A Little Daytime Drama’
‘The Wine Show’ Preview With Matthew Rhys, James Purefoy, And Dominic West On Sundance Now
‘The Young and the Restless’ Spoilers, August 2-6: Phyllis Gets Everything She Needs
Duggar Cousin Amy King Urges Anna To Stop Being Silent & Tell Her Story