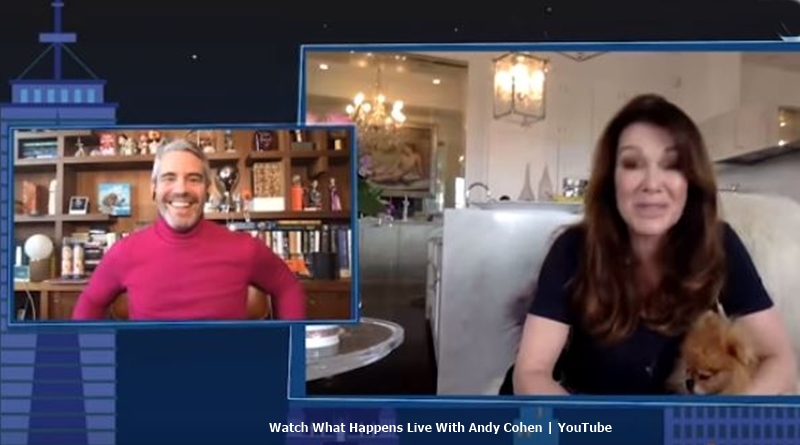 RHOBH fans know that Brandi Glanville and Lisa Vanderpump feuded for so long, most people forgot what started it off. Vaguely, it involved Brandi objecting to Lisa getting involved with Scheana in her life. From there, it escalated into outright hostility, with Brandi claiming Lisa eventually ruined her life. It seems the ex-friends really won’t ever get over their disagreements. Now, Lisa slipped the knife in on Brandi during a recent episode of Watch What Happens Live.

On April 7, a few days ago, Lisa featured on WWHL. During the show, she and Andy Cohen discussed her restaurants. TV shows Ace reported that Lisa worries about the future of the restaurants and about her employees. Actually, many of them sit at home unemployed right now. As the restaurants form the basis of her business, naturally, her concerns revolve around the viability of restarting, if and when the COVID-19 pandemic ends. Most of the chat with Andy went around that subject.

Bravo TV noted that “Lisa is just one of several Bravolebs whose businesses are struggling during this difficult time.” The conversation about the restaurants actually might have distracted from the moment when Real Housewives of Beverly Hills alum Lisa slipped the knife into Brandi Glanville. The outlet noted that the opportunity came after the restaurant conversation. At one point, RHOBH host, Andy Cohen “asked her on behalf of a fan for her reaction to Brandi Glanville calling her “an inspiring businesswoman.” That’s when Lisa stabbed and twisted the knife.

Lisa disses RHOBH alum, Brandi Glanville, no kissing or making up, it seems

Brandi Glanville made her comment about Lisa being “an aspiring businesswoman” on the Everything Iconic with Danny Pellegrino podcast about four weeks ago. In classic Lisa-style, her reply slipped between the ribs. She said, “Oh my God if I invested in anything she said, I’d be in trouble.” Lisa reminded Andy that her RHOBH co-star once called her a “two-faced, lying see you next Tuesday,” person. Finally, she noted, “whatever she says, it’s actually totally irrelevant, but thank you. I’ll take it.”

Actually, it’s not often that Lisa disses Brandi publically, as one fan on Twitter pointed out. They wrote,  “I never hear Lisa Vanderpump mention Brandi Glanville but Brandi always has Lisa Vanderpumps name in her mouth… who exactly is holding a grudge?” Well, it would be wrong to say “never,” and probably we’ll hear more of it in the future. These old RHOBH hands seem to hang onto all the slights and differences they can.

You can see the bit about Brandi at 1.08 in the video below.

What did you think about Lisa Vanderpump taking an opportunity to slip the knife into Brandi Glanville? Sound off your thoughts in the comments below.