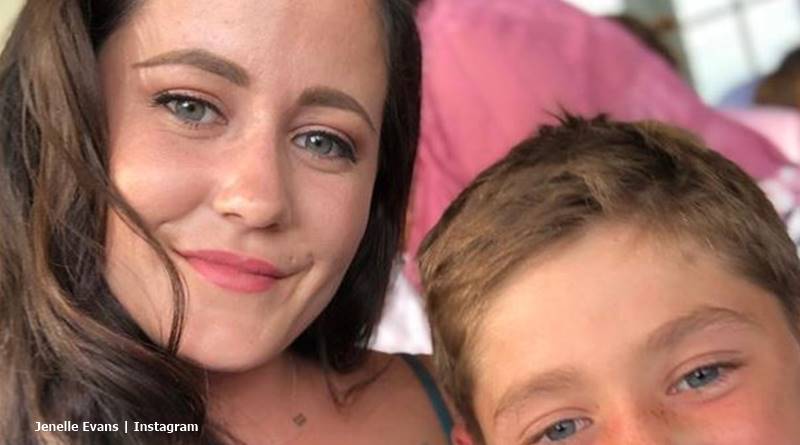 Jenelle Evans, no longer a teen mom, carries a bit more weight these days. After all, she birthed three kids, Jace, Kaiser, and Ensley. And, she’s getting close to her 30-year-old mark. Women fluctuate with their weight as they grow older, so this is not unexpected. But, body-shamers hit out at her on her social media as often as they can and troll on her. Now, she let them know that she doesn’t care what they think.

Jenelle Evans bravely wears a bikini, shares it on TikTok, and shows a bit of a tummy

Jenelle posted a video that she made on TikTok featuring herself in a bikini at the poolside. And yes, it’s obvious that tummy won’t stay where it used to. Many of her fans think she’s rather brave wearing a bathing suit, dancing in it, and then sharing it on social media. It takes rather a lot of courage, especially in a world that thinks size is important. More and more these days, perceptions about larger people change. But, some people still take the rather immature belief that body image is more important than anything else. And they often body-shame people on social media.

Those people who shame others for their weight, according to Walden Behavioral Care, often do so as a diversion from their own inadequacies and flaws. So, the laugh’s probably on those body-shamers, rather than on Jenelle Evans. Sometimes, body-shamers really just like “targeting physical appearance, rather than expressing what is really going on [with the body-shamers’] emotionally.” It’s not likely that Jenelle Evans cares about the psychological issues of her haters. And, she let them know that. The video clip she shared got captioned with, “When people talk about my weight, I’ll just keep on dancing 💃🏻💓 #LoveYourself.”

Naturally, those people who love to body-shame Jenelle Evans immediately started doing it all over again. Loyal fans stepped in to put them in their place. One person said, “Omg she looks awwwful!” Others used the word “FAT” to describe her, as if using caps might make her seem bigger than she really is, and she commits a major social crime. However, other people hit back at them. One fan said, “We need more confident women like this! Anyone who puts you down because of your body should dig a little deeper into why they’re so bothered.”

Other Jenelle Evans’ followers agreed that it’s pretty natural for women to fluctuate with their weight. One person said, “Any real woman fluctuates in weight. Ya it would be nice if we stayed the same size all the time but unfortunately thats unrealistic. Who cares. Weight can be changed ignorance…cannot.” Other fans simply admire her courage to show her body and let people know it’s okay to love themselves.

When people talk about my weight, I’ll just keep on dancing 💃🏻💓 #LoveYourself #StayHome

What do you think about Jenelle Evans dancing in her bikini? Do you agree it takes some courage if your weight’s not exactly where you’d like it to be? Sound off your thoughts in the comments below.

Remember to check back with TV Shows Ace often for more news about Jenelle Evans, the alum from MTV’s Teen Mom 2.

New Photo Of Josh & Anna Duggar’s Son Michael Has Fans Confused
‘Bold And The Beautiful’ Joe LoCicero Is Back As Vinny Walker But How?
Justin Duggar’s Wife Claire Spivey Shows Off Transformation [Pics Inside]
Jill Dillard Shows Off Her Garden – Does She Have A Green Thumb?
Courtney Rushes Rivers Waldrop To Hospital AGAIN, Is She Alright?!