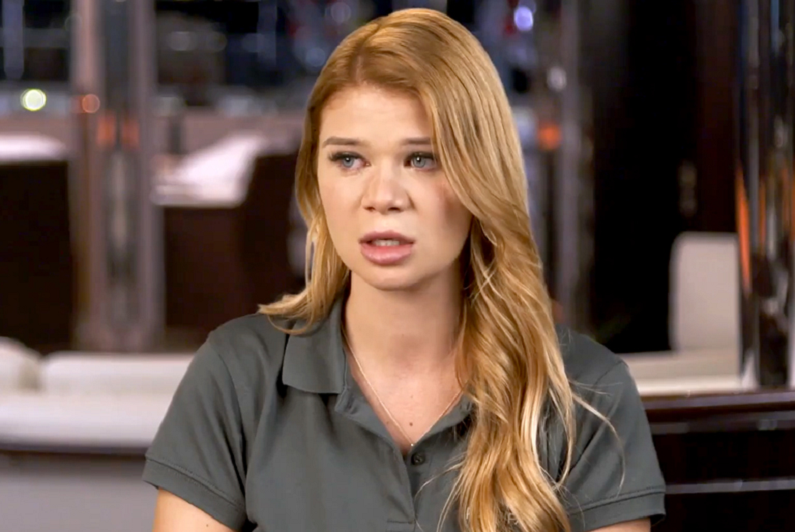 Below Deck Sailing Yacht star Madison Stalker has become the fan-favorite of the choppy series. Fans showed their support on social media after witnessing her difficult relationship with chief stew Jenna MacGillivray. She went through a lot already and there’s several weeks to go.

Nowadays, the second stew is “living in sweatpants” amid the coronavirus pandemic. She’s feeling much more comfortable than she did in Season 1 of Below Deck Sailing Yacht. Between almost getting fired by Captain Glenn and getting friendzoned by Parker McCown, she’s had a tough time. In an exclusive interview with Decider, Madison is revealing her most “flabbergasting” moment yet.

It’s time to talk about that awkward run-in with Captain Glenn and Jenna on Monday night’s episode of Below Deck Sailing Yacht. It all started when the chief stew told the captain her concerns about Madison’s work ethic. She claimed that Madison was behind in her work because she stays up all night long. Madison told Decider that she didn’t feel like she was heard during the meeting.

“The fact that she went behind my back and her whole thing is, if you have an issue come talk to me about it, and she never talked to me about it,” Madison explained. “The fact that she threw around the world unprofessional is just, it was flabbergasting. Like you’re making out in the galley, you’re making out in the crew mess, you’re literally hanging all over someone, during work.”

Madison was referring to Jenna’s relationship with chief Adam Glick. Fans haven’t warmed up well to this boatmance. They quickly became the most annoying couple out of the entire Below Deck franchise. While the show is known for hook-ups, this one hasn’t won fans over.

Ratings have been lukewarm and fan reaction is mixed. While most look forward to the new show after the worst season of Below Deck ever, others find the cast and crew unbearable. Other fans feel that the show is altogether boring.

Is Below Deck Sailing Yacht already casting for Season 2?

While it’s taking time for fans to warm up to the series, casting agents are already looking forward to the upcoming season. Diana Wallace Casting made an announcement on Instagram, as per Showbiz Cheat Sheet.

Do you work on a SAILING YACHT?! Below Deck is casting ALL positions of *experienced* yachties for the upcoming sailing season! If you have worked on yachts before and want to know more, send your CV + photo + a bit about yourself to dianawallacecasting@gmail.com…or tag your sailor friends below! ⚓️🛥 . . . . . . #dianawallacecasting #nowcasting #belowdeck #yachties #yachtie #sailingyacht #chiefstew #firstmate #bosun #deckhand #skipper #yachtweek #yachtstewardess #yachtstew #belowdeck #bravo #yachtlife #sailors #sailorsofinstagram #womenwhosail #chiefengineer #yachtchef

It’s unclear whether there will be a new crew in Season 2. A cast shakeup could be just what Below Deck Sailing Yacht needs.

Viewers are having a hard time getting into this new series. While most people enjoy the cast, others just can’t seem to find any enjoyment.

Despite the mixed views, ratings have slowly increased. The drama has slowly unfolded with a blossoming romance and a bickering long-term couple on board.

The Mystery Behind Erika Jayne’s Mascara-Stained Tears
Todd Chrisley Debunks Lindsie Bombshell: Wait, She Was Involved?!
Katie Thurston Slams Fashion Haters About Her Looks
‘Dexter’ Revival: Release Date, Cast, What We Know So Far
Fans Worry ‘Bringing Up Bates’ Will Be Canceled Like ‘Counting On’