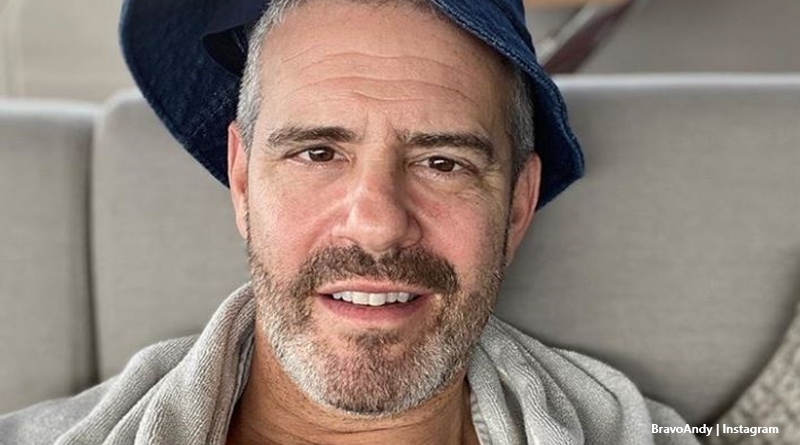 Andy Cohen went down with the coronavirus in March. His fans feared for him as he’s hugely popular and he has his little boy Ben to look after. However, he recovered, reunited with Ben and went back to working from home, bringing out more Watch What Happens Live. But some people grew critical as he’s not donating plasma. Now, the Bravo host explained why.

Andy Cohen – follower attacks him for not donating plasma, explains why

TV Shows Ace reported that when Andy recovered from his coronavirus, he reunited with his son Ben. The host of many reunions on Bravo said that the one with Ben was the very best. Relieved fans then saw his return to his shows which he carries out from home right now, and thanked him for keeping them entertained. But other people wondered if he’d donate his plasma. WHIOTV7 reported that “the FDA is encouraging those who have recovered from COVID-19 to donate their blood and plasma.”

Recently approved to help those trying to recover, obviously, it’s highly regulated. How they use it, is to get the antibodies from the recovered patient. Their donated blood helps other people who contracted the virus get over it better. And, it looks like the strict regulations prevent Andy Cohen from doing his bit by donating. One follower attacked him on Twitter and slammed him for being selfish. But, Andy explained he has a very good reason for not doing it.

Not being selfish – the regulations get in the way

One follower attacked Andy. Not apparently anyone particularly famous or influential, they wrote, “I been asking him about donating plasma since he overcame it to help others but he won’t.” Then they noted, “All he needs is confirmed positive and neg results to help others, but he’s selfish!” Well, it turns out that it’s way more complicated than just needing to be “confirmed positive and neg results.” Andy explained he tried and can’t donate.

In reply to the rather vicious attack that called him “selfish,” Andy Cohen wrote, “Applied to donate plasma. They will not accept blood from g*y people. Did you know that?” Other followers responded, and one person commented, “Im glad you addressed this Andy. I didn’t know this about blood. Clearly, she didn’t either.” But the critic never stopped at that reply and came back with, “Wrong, think again buddy.” But this person seems very upset over this and in a single day retweeted critics or trolled on him over 40 times. 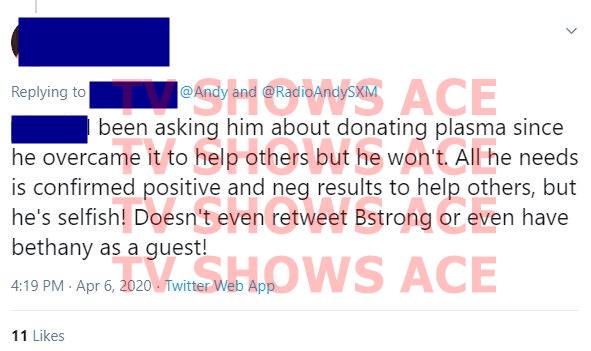 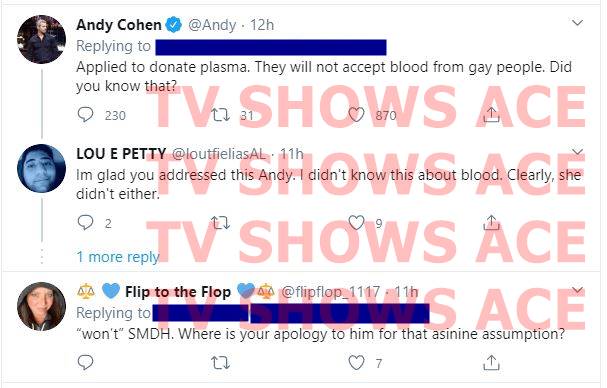 What does the FDA say about gay men donating after coronavirus?

The New York Times reported that the FDA “reduced its recommended deferral period for male donors who have had s*x with another man to three months, down from one year.” Nobody but Andy knows if he engaged in intimacy in the last three months. And, many people feel it’s nobody’s business. Actually, if Andy Cohen lied and donated anyway, from the standpoint of the FDA, he could place people at risk. And, notably, the news outlet also wrote, “The F.D.A. also previously recommended that women with male s*xual partners who have had s*x with men in the past year not donate blood. The revisions on Thursday lowered that period to three months as well.”

What do you think? Do you think that if Andy Cohen tried and can’t donate, for now, that’s his own personal business? It certainly sounds like he may have a legitimate reason for not donating. Sound off your thoughts in the comments below.

Remember to check back with TV Shows Ace often for more news about Bravo’s Andy Cohen.