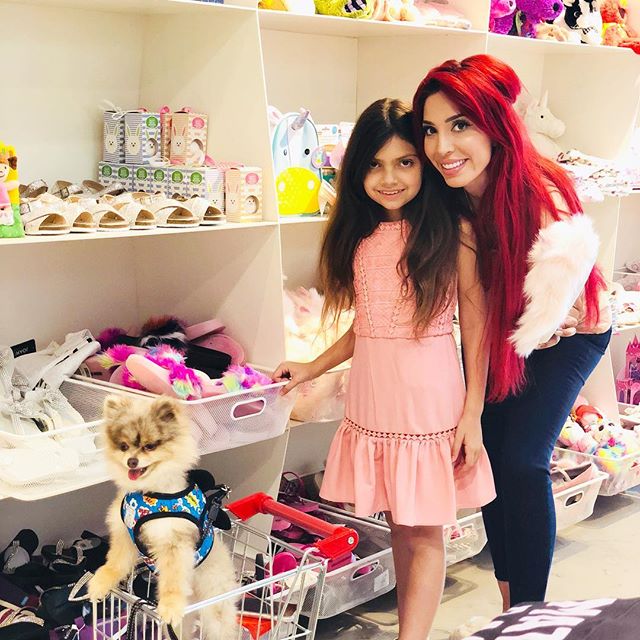 Why Won’t They Let Her Have a Puppy?

Farrah’s rise to fame began in 2009. Her teenage pregnancy is a feature of MTV’s 16 and Pregnant. Since then she has been on Teen Mom, Couples Therapy, Teen Mom OG, Celebrity Big Brother (in the UK, representing the United States…but why?), Marriage Boot Camp: Reality Stars Family Edition, and MTV’s Single AF.

Also of recent past, on her filmography list on Wikipedia are two adult films.

Needless to say, Farrah (and her daughter, Sophia) have been in front of cameras for the better part of nearly ten years.

In a YouTube post, Farrah shared that she and Sophia are adding another pet to their crew. When people got wind of this addition, they took to the puppyspot.com to complain. Through these complaints, they brought to light the allegations that Blue was thrown off a balcony.

In 2018, Farrah and Sophia’s Pomerania Blue passed away. Reports indicate that Blue died from a collapsed trachea and stress caused by nearby construction. Suspicions were quick to rise when there is a Music.ly post from Sophia’s account stating, “I was getting Blue to go outside and my only choice was to toss him outside. And then I did but then he went into shock and 30 seconds later he passed with no heartbeat.”

When PuppySpot cancels their order for a puppy named, Manny, Farrah goes off on customer service.

“I don’t think you’ve ever dealt with somebody who’s in the public eye, but I will say this: We deal with a lot of very untrue, hateful, discriminating things that you won’t ever have the luxury of going through! So, you’re talking to one smart, intelligent, and tough woman. And I will say this: Any of your discrimination, your hatred, and the lies that you based anything off of, is illegal by law!”

Farrah is very proud of her pets. Recently, Cupcake the Zuchon has taken social media by storm. She even accompanied Farrah and Sophia

If you’re like me, you had to Google what a Zuchon is. It’s a mix between Bichon Frisé and Shih Tzu. Basically, it’s a purse puppy that has a height of around 12 inches and weighing 12-14 pounds.

A quick trip to Cupcake’s Instagram (booandcupcake) and you’ll see that both dogs are registered emotional support animals. That’s not all! Cupcake is dyed pink and Boo is blue.

The dying her pet’s fur and using ribbon as muzzles elicited a response from PETA. PETA issued the following statement to Farrah.

“Subjecting dogs to the stress of being dyed- which is also potentially toxic- and restricting their opportunities to eat, drink, and even breathe by tying a ribbon around their mouth are cruel acts that can have fatal consequencwes, and show a profound lack of empathy.

PETA urges Farrah Abraham to start treating dogs like more than fashion accessories or surrender them to someone who will love them unconditionally.”

Farrah responds that she is using the muzzle per her trainer’s recommendations.

While on the phone with a customer service representative from PuppySpot and recording for her podcast Abraham Gals,  Farrah says,

“We are a family that deeply cares about our pets. Everything! About the breed, about how they look. I mean, we get so, discriminated against for anything and all things that we go above and beyond for our pets- for safety, for health, for all things. They actually have public Instagrams! That’s how much we care about our pets!”

“COMING IN HOT🐶 OWNER OF PUPPYSPOT.COM scammed sophia of her new puppy online at PuppySpot.com signed a contract, approved family, took all the money and then cruelly used haters made up lies of passed hater traumatizing false claims of beloved blue passing two years ago as the unethical and illegal call two weeks later as a slanderous scam excuse to not send her new puppy she owns, Sophia won’t have her new family member for Easter. Super Mom Farrah & Family step in! See the public review Farrah wrote this morning & listen to this NEW EPISODE ABRAHAM GAL’S EP. #4 of “DON’T BUY YOUR DOG ONLINE FROM PUPPYSPOT.COM RECORDED CALL FROM OWNER”. How malicious can a online dog seller be to traumatize a family again after therapy?!”

For Episode 4 of Abraham Gals Farrah records a series of conversations between PuppySpot and her step-mother, Amy.

At one point, Amy suggested having someone else purchase the puppy on behalf of Farrah.

Farrah does what Farrah does and continues to berate the customer service representative on the premise that they spent two weeks expecting to receive the dog. “I take that to heart. I take that to realization of this is such a hate crime right now. And it’s discrimination, and it’s hateful.” Further insinuating the only reason this is happening is because of how she’s portrayed in the public eye.

Where is Manny Now?

As of 7:30 PM EST on Tuesday, March 31, 2020, Manny is still available for purchase from puppyspot.com. Starcasm updated their report to note that Farrah’s review of the website is on TrustPilot, blurred out and labeled as reported.

As we all know, Farrah is no stranger to controversy. She recently posted some not so stellar things about the coronavirus pandemic. So will she or won’t she get a new puppy? Stay tuned to TV Shows Ace for more updates.