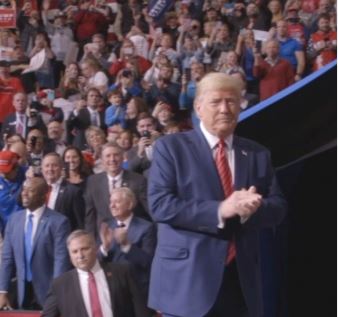 Every day United States citizens are watching television and waiting on updates about the coronavirus. There has been a lot of talk about a coronavirus bill that would put money into the hands of people who are going through a rough time right now. There is a lot more going on than just the fact that we can’t watch the latest episodes of The Bachelorette or General Hospital.

NBC News shared the details about the decision that came down late in the night. So far, they have not broken into regularly scheduled shows to reveal the news on television. Donald Trump does a daily update on television to let everyone know what is going on with the coronavirus. This may be something that he talks about tomorrow now that details are out.

Besides the money for Americans, there is also other money in this bill. It will go to help hospitals, small businesses and businesses such as cruise lines that have been hurt by the coronavirus. They have had to completely shut down operations.

How Much Money Could You See With this Bill?

There are a few other specifics to the bill, so make sure you don’t spend that money just yet. This money is meant to help people pay their bills during this rough time where many are without work. It is needed to help the economy.

There will also be a big change in unemployment during this hard time that was also on this bill. Unemployment insurance would go up and be able to increase payments. There are a lot of people who can’t receive unemployment at this time but now furloughed employees and freelancers will be included in the option to get unemployment. This is really needed during a time that people are losing their jobs when they never thought that would happen.

President Trump is expected to sign this bill. It took them almost a week to come to the decision they did tonight, but hopefully, things will move a bit faster after this. You can assume that President Trump will keep everyone updated when he speaks on television again tomorrow.

‘Real Housewives’ Star Continues To Be Dogged By ‘Cult Leader’ Claims
Why Wasn’t Michael Allio Chosen As ‘The Bachelor’ 2022?
Kanye West Wasn’t As Committed To Kim Kardashian As She Is To Him
Felicity Vuolo Twins With Dad Jeremy In Sweet New Photo
Chase Chrisley Really Doesn’t Understand The Pope