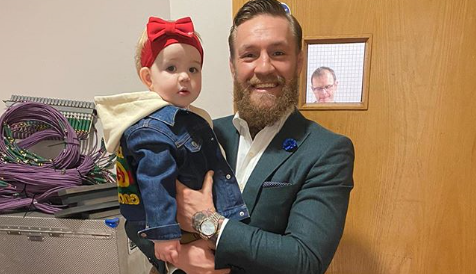 People are no doubt scared of the virus that has been rapidly spreading across the world. Conor McGregor is a well known MMA fighter and he has spoken out about keeping his family safe now that the virus hit close to home.

McGregor was going to announce a donation he was giving and had brought his family with him to the studio. He prepared to talk live to all the talk shows for the morning. He got some devastating news while he waited.

While Conor McGregor and his family prepared for his announcement, he learned his aunt had passed away and he originally thought it was because of the Coronavirus. He said he received, “a phone call telling me that my lovely little auntie Anne had passed away. I couldn’t go live anymore. My poor little friendly loving auntie. My mother’s sister. This stupid f——ng virus.”

The fighter said he took his family to Bull Island near Dublin and looked out at the sea. He decided to go away and protect the rest of his family while he could. Later in an Instagram post featuring a picture of his aunt he said, “I am grateful for the kind wishes and sympathy for my Auntie’s passing. I want to clear up that it has been confirmed she was not a victim of coronavirus. As we prepare for her funeral I know that many of us will confront the virus in the weeks ahead.”

Finding out that wasn’t what killed her, didn’t make McGregor any less passionate about the people it might affect in the coming weeks.

I am grateful for the kind wishes and sympathy for my Auntie’s passing. I want to clear up that it has been confirmed she was not a victim of coronavirus. As we prepare for her funeral I know that many of us will confront the virus in the weeks ahead As I gather with my family I ask you all to make an extra effort to be there for friends and family during the stressful days ahead And from my family, thank you for your support at this sad time ❤️ 🙏

Ireland Has The Virus Contained According To McGregor

Conor McGregor has complete faith Ireland has the virus contained. He said according to The Blast, “Ireland you amazing, amazing country. I believe we have this virus contained. And through this containment, we actually may have gone and contained them all.” He stressed the importance of good hygiene.

McGregor shakes a lot of hands as a popular public figure. While he’s always practiced good hand hygiene, he is now realizing how much he touches his face. He said shaking hands is too careless. Since he trains so much he says he works to a low immunity. This was why he took his family to Bull Island. He always catches little colds and it’s important for him to stay vigilant. He tells other people to, “stay vigilant on our personal hygiene. And our personal space. God speed to us all.”