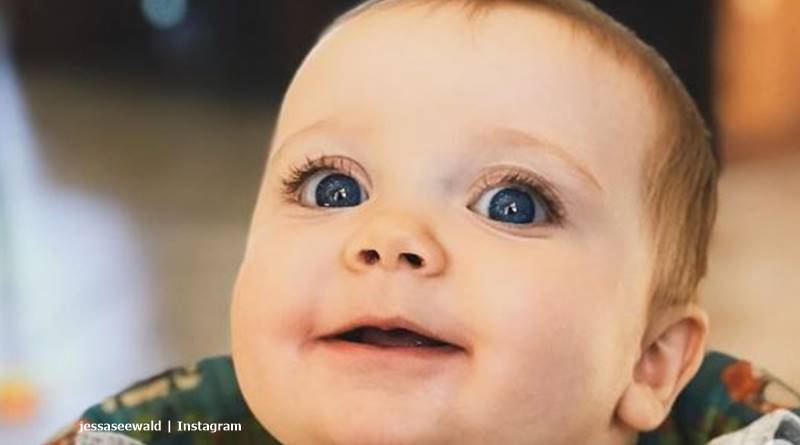 Duggar fans know that the family loves using head bows on their daughters. Over the years Michelle used them on her kids and now the daughters and extended family also use them. It seems they use them so people know the little ones are girls. But, Ivy didn’t like them, so Jessa Seewald tricked her into accepting a bow.

TV Shows Ace reported that Jessa’s little girl seems a very happy child. Back in the last week of February, we noted that she shared a picture of her daughter and captioned it, “happiest baby I’ve ever met.” Well, it now turns out that happy or not, she had a big downer on headbands.

Jinger often puts a headband with a big bow on her daughter, Felicity. And, she toddles around unfazed by it, But Jessa notes that Ivy said “nope” to that a while back. Actually, a lot of Duggar fans also hate those headbands and agree with little Ivy that they must be very annoying.

On Wednesday, Jessa shared another picture of her adorable child. But, she didn’t have a headband on. She noted, “she’s been over the headbands since she learned how to pull them off her head a few months back.” But Jessa revealed now Ivy’s hair’s grown a little bit, she found a way to trick her. Now, she uses a bow with a clip, and Ivy didn’t detect the ruse yet. She notes, “So far, undetected.”

Duggar fans noted they also have the same problem with their daughters. One posted, “I have the same problem. Headbands are definitely not happening.” But then, she got wise to the bow with the clip and now, “she pulls them out.” Hmmm, maybe it won’t be long before Ivy realizes she’s been tricked into being a bow-head. Another follower noted, “She doesnt need them. Literally the cutest girly girl regardless. 💕”

She’s been over the headbands since she learned how to pull them off her head a few months back, but I’m excited she finally has enough hair to clip in a little bow. 🎀 So far, undetected. 😎

Ivy’s cute and got a huge laugh

The little girl featured in another post and a video clip showed her laughing so hard at her brother that she eventually choked on her own saliva a bit. It seems that with the bow undetected, the Duggar grandchild’s more than happy in her little world. One fan noted, “Babies laughs are so pure, innocent and genuine! Nothing fake about it! What a precious sound and what…beautiful children!”

Actually, InTouch Weekly notes that Jessa’s daughter really is a cutie pie and fans simply can’t get enough of her.

What do you think about Jessa tricking her daughter Ivy into accepting a bow on her head? Do you think it won’t take long before she discovers the ruse? Sound off your thoughts in the comments below.