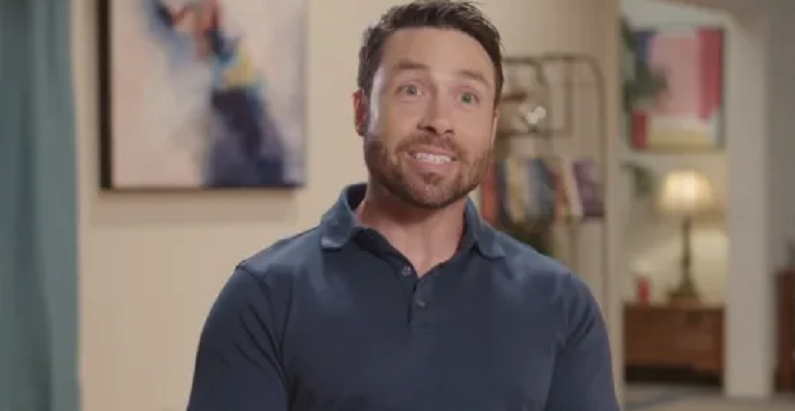 90 Day Fiance fans quickly learned about Geoffrey Paschel on Sunday night. 90 Day Fiance: Before the 90 Days Season 4 introduced fans to four of the six new couples. Fans got to meet Geoffrey Paschel, who is a blue-eyed single father who is hoping to meet his girlfriend, Varya, from Russia.

Some fans remarked that Geoffrey had nice eyes. Other fans liked the way that he chopped wood while shirtless. Understandably, fans wanted to learn more about him. Most of them took to Google to find out more. During the episode, Geoffrey’s name started to trend on Twitter, and for all the wrong reasons. Read on to learn more about the 90 Day Fiance: Before the 90 Days star.

Who is Geoffrey Paschel?

According to an In Touch report, Geoffrey Paschel is a 41-year-old man from Knoxville, Tennessee. He calls himself a “country boy” because he loves to work outdoors. Geoffrey is a landlord who owns several properties in the Knoxville area. Not only that, but he’s also a single dad. In the Before the 90 Days premiere, Geoffrey exclaimed that he was a “bad boy” until fatherhood came along.

Annnnnd the day has come. I have to say it’s kind of bitter sweet in way. I’ve enjoyed some semi-anonymity most of my life, but as we all know, recently I have garnered some, well lots, of attention (be patient, the truth is much better than the silly clickbait stories). 90 Day Fiancé: Before the 90 Days is going to tell my story. It’s my story of looking for love far from any normal reach. It’s a story of nervousness, excitement, adventure, and lots of other things I can’t say all wrapped up into one big bundle. Varya and I took a chance…this chance was either a hit or miss. It is either ❤️ or 💔 stay tuned every week and enjoy our story and see for yourself where things will end…or continue 😉 Tune into TLC at 8:00pm Eastern or check your local listings! . . . . . . #90dayfiance #90dayfiancebeforethe90days #beforethe90days #mountains #hike #thoughts #insight #dwelling #nervous #trail #itson #sundayfunday #beard #hatersgonnahate #knoxvilletennessee #knoxville #knoxvilletn #timeflies #geoffreypaschel

He has three sons from two different relationships. Dakota and Pax are his oldest sons from a relationship he was in over 20 years ago. Geoffrey also has a 4-year-old son, Cayvan, from one of his previous marriages. Geoffrey also revealed that he lost his youngest son, Kazhem.

Geoffrey’s personal life had 90 Day Fiance fans doing some mental math. He even admitted that he’s been married a “few times.” One of his ex-wives was the mother of his two younger sons. The TLC star said that his marriage to Cayvan’s mother made it hard for him “to trust people again.” But he hopes to find love with his Russian girlfriend.

90 Day Fiance star is involved in an ongoing legal case

The reality star first made headlines in January when he appeared in court for a status hearing over allegations of domestic assault, kidnapping, and interference with a 911 call. Geoffrey also has vandalism charges against him after an alleged altercation broke out between him and his ex-girlfriend in June 2019, according to the court documents obtained by In Touch.

The affidavit states that officers arrived to the scene of the incident after Geoffrey’s then-girlfriend called 911 from a neighbor’s house. During the call, she accused him of domestic assault. According to the court documents, officers noticed “abrasions” and “bruises” on her elbows, forehead, and knees.

Geoffrey claimed that the bruises were “self-inflicted.” He was then taken into custody, but then he tried to “kick out the windows of the patrol vehicle,” according to the court documents. Officers claimed he was the “primary aggressor,” which led to his apparent arrest.

Geoffrey’s ex-girlfriend has a restraining order against him, which she extended twice. In the meantime, his third wife fought to seek full custody of their youngest son. That case is currently pending. On January 17, Geoffrey waived the arraignment for his criminal case. In a statement to his local newspaper Knox News, he declared his innocence. He is reported back in court on March 26.

During Sunday night’s episode, some fans remarked that they didn’t have a good feeling about Geoffrey. They felt even worse after discovering his alleged dark past online. They took to Twitter to share their feelings over the new cast member. Some fans called out TLC for allowing someone with a criminal past on the show.

Now we know why Geoffrey broke up with this chick. #90DayFiance pic.twitter.com/lNggaQwJm9

I’m saying this now Geoffrey is a little crazy. I feel it in my bones. Watch and see! #90DayFiance pic.twitter.com/vZR3U8HBTW

This Geoffrey guy was giving me American Psycho vibes so I googled him and sure enoughhttps://t.co/TLNYv9lGyN#BeforeThe90Days #90DayFiance

Nearly spit my wine out when Geoffrey’s friends said he has “impulse issues”. With a criminal history like that, I’d say so. #90DayFiance #BeforeThe90Days pic.twitter.com/ubo7wMgGiD

What are your thoughts on Geoffrey Paschel? Do you also feel uncomfortable watching the show now knowing his alleged criminal past? Sound off below in the comments section.