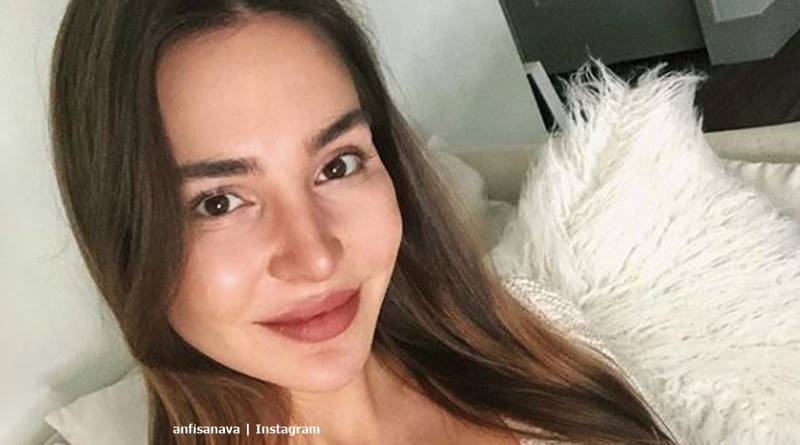 90 Day Fiance fans heard that Anfisa might be stepping out with a new man. It came after a leaked photo of her emerged showing her with someone named Leo. But now, with Leo posting more pics of her on his Instagram, it seems there’s truth to the original rumor. On one of his photos, Anfisa told Leo he should thank her, and not God.

TV Shows Ace reported on the leak that seemed to show Amfisa gave up on waiting for Jorge to get out of jail. Recall that he “sits inside a prison for dealing in marijuana.” He’s due out this year, but it looks like he won’t hook up with Anfisa when he sees freedom. That’s because the @fraudedbytlc account on Instagram released a photo of Anfisa with another man.

At first, some followers questioned the truth of the rumor just from one photo, and several fans suggested that the 90 Day Fiance alum just posed for a picture with a friend. However, within days more photos emerged online. The latest one came from Leo and he posted it up on Tuesday night.

Leo posts a new picture of Anfisa, thanks God

Leo’s picture showed Anfisa and him standing close together overlooking lovely parklands. He captioned it with, “Thank God that she’s way better at taking selfies that I am! 😄 (sic).” Many people reacted to the post. One of them said, “She can be happy. She doesn’t have to wait her whole life for George. She’s young, she needs to live her life. Good for her. 👌(sic).”

Another 90 Day Fiance fan wrote, “Glad to see the queen happy. I hope you treat her right!” Anfisa started off with a lot of critics in the show, but in fairness to her, Jorge made out he had a lot of money and forgot to mention his run-ins with the law, Cheatsheet reminded readers.  Spending the time Jorge’s been inside, getting fit and improving her lifestyle, she attracted many admirers.

New admirers don’t blame Anfisa who told Leo to thank her, not God

These days, Anfisa mostly went from hated to admired. One fan wrote, “You guys look good together😍 am happy she moved on treat her like a queen she been through a lot😘.” And, further on in the comments, Anfisa popped up and had her say. She said to Leo, “Don’t thank God, thank me 😜❤️.” That got her another nice comment from a fan. They responded with, “you’re a Goddess so… 😜.”

It certainly seems like a lot of people like the fact that the 90 Day Fiance alum moved on from Jorge. That does not say she got everyone loving her. But, overall, it seems that Leo’s an acceptable choice for her. What do you think? Do you agree with her that Leo should thank her for taking a great selfie, and not God? Sound off your thoughts in the comments below.

‘Marrying Millions’: Bill and Bri Talk Babies, He Is Sure He is Fertile
‘When Calls The Heart’ Season 8, Episode 3 Preview ‘From The Ashes’
How To Watch ‘Punky Brewster’ Reboot & Original For FREE
Kody Brown Lashes Out At Critical ‘Sister Wives’ Fan: ‘Grow Up!’
‘Supergirl’ Season 6 Premiere Date Set for March 2021