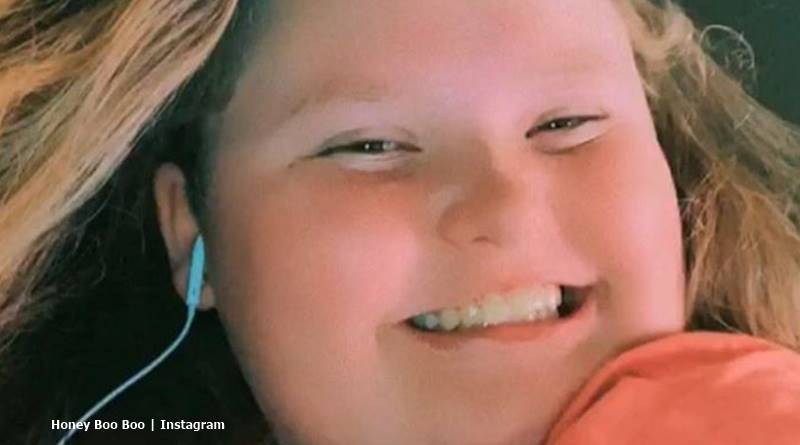 Honey Boo Boo (Alana Thompson), broke a two-week Instagram silence after a previous post got fans a bit concerned for her. But now, she came back with a photo of herself that has fans agreeing she’s blooming into a real beauty. Always quite a pretty child, she suddenly looks like this amazing young woman, they think.

TV Shows Ace reported in mid-January, that fans grew concerned about Mama June’s daughter. Back then, she posted up a photo with a caption that just said, “Things ain’t easy.” We noted that many fans tried reaching out to her. “Many of them begged Alana to reply and tell them about the problem.” But, she never came back to them. So, people resorted to leaving messages of encouragement and love. Obviously, they feared for her state of mind, given the circumstances with her mom.

Since then, more bad news about her mom came out. But, something good sort of happened as well. TMZ reported that June gave her daughters a shoutout on social media. In the post, she told them that she loves and misses them. That sounded like good news. But in another way, maybe it wasn’t genuine. The outlet noted that a source claimed”the family suspects this is June’s way of getting some positive attention, so she can ultimately start making money through Instagram ads. They think she’s desperate for cash.” But Honey Boo Boo looks so happy in her latest post, maybe it made her hopeful.

Fans think Alana’s simply a beautiful woman in the making

In her post on Wednesday night, Honey Boo Boo wrote.”Don’t sweat it, baby.” She showed a mirror picture. Her makeup looked spot-on and her hair was nicely done. Many fans went to tell her that she’s really beautiful. And, by the looks of the photo, they seem absolutely right. As a younger child, she often got comments saying she’s “sweet’ or “cute.” But now, they think she really blooms into a stunning woman.

Literally hundreds of fans simply wrote, “beautiful.” But others elaborated on their feelings. One said, “Whose beautiful? You💟💟.” Another noted, “I hope your doing well sweetheart 🙏🙏💕💕 You are a beautiful young lady.” Then came, “You are literally so beautiful I can’t get over itttt!” Other fans used the words “stunning,” “pretty,” and gorgeous.” Then, one fan told Honey Boo Boo nicely, that seeing her so beautiful makes them feel “insecure.”

What do you think of the latest photo by Honey Boo Boo? Do you think she’s blooming into a really beautiful young woman? Sound off your thoughts in the comments below.