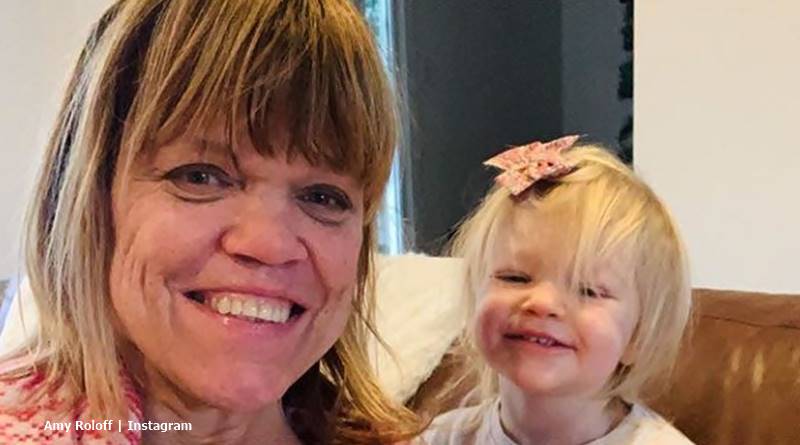 LPBW fans heard that Amy Roloff set plenty of 2020 goals for herself. One of those involves getting everything packed up and the chores of moving house done with. But, she set aside those chores to enjoy some precious time with Jeremy’s daughter Ember. Sometimes life’s simply too precious to miss special moments.

LPBW – plenty of change for Amy Roloff, but she takes time for Ember

Taking to her Instagram on Tuesday, Amy Roloff told her fans about setting aside moving chores because she opted to spend time with Ember instead. Her post showed Amy and Ember dressed for cool weather during their outdoor fun.  She wrote, “Always a special day when I spend some time w/ my grandkids. Today I got to have a fun day outside w/ Ember 💗 💦.” Then she said that she stopped working on packing things up. Instead, they went outside and on a “the rainy PNW day” they splashed “through puddles and more.”

Actually, fans might find it fun to know Ember enjoys splashing in puddles these days. Recall in previous winter seasons, the little girl never really got into the cold white stuff. But, that changed in time as well. Now, it seems this little cutie’s really getting into life on the farm. Playing with the LPBW grandma really saw her putting out the biggest smile this week. And, those smiles got returned by Amy. Amy said that Ember’s fun to be with as she’s “amazing, inquisitive,” and “adventurous.”

TV Shows Ace reported that in the new year, Amy planned so many new projects. One of those included getting the big move into town down. Amy’s been busy getting rid of some stuff, making decisions on what to keep and what to throw out. Her house in town is much smaller than the farm. And, bear in mind, there’s a lifetime of old memories in those packing cases. But, it looks like Amy won’t miss any opportunity to make news memories with her grandchildren.

So, she set aside her plans to pack. Amy noted, “Sometimes it’s better to say this can wait, this is more important than whatever you ‘need’ to do because you may not get this exact moment and time again.” And that’s very true. After all, like most Americans, the LPBW star probably also heard about the tragedy of Kobe Bryant. He, his daughter, and seven other people died in a helicopter crash this week.  USA Today reminds readers their pilot “accrued 8,200 hours of flight time.” Probably, nobody expected it to be a father and daughter outing for the last time.

Always a special day when I spend some time w/ my grandkids. Today I got to have a fun day outside w/ Ember 💗 💦She is amazing, inquisitive, adventurous, caring and so much more. My grandma ‘mimi’ heart was so happy to share the day with her. Packing up stuff from the farmhouse to my new house stopped for a couple of hours because the moments with Ember over ruled and were priceless. Sometimes it’s better to say this can wait, this is more important than whatever you ‘need’ to do because you may not get this exact moment and time again. I loved taking the moment to hang out with my grand-daughter on this kind of rainy PNW day and splash through puddles and more. 😊💗☂️💦. #grandmalove #granddaughterlove #blessed🙏 #thankful #amyroloffssecondact

What do you think about Amy Roloff setting aside the must-do list of chores to spend precious time with Ember? Sound off your thoughts in the comments below.