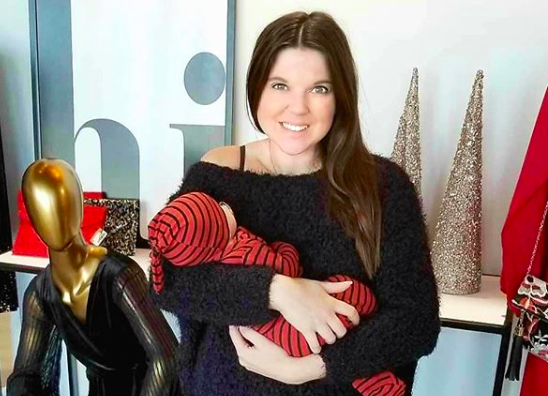 Counting On cousins, Amy Duggar King was spotted praising Anna on Twitter for looking great after giving birth to her sixth baby. Anna Duggar is the wife of Amy’s first cousin, Josh Duggar.

Wait…which one is Amy Duggar?

According to Goodhousekeeping, Amy used to make appearances on 19 Kids and Counting. She was known for always going against the norm in the Duggar family. Amy’s mom is Jim Bob’s sister Deanna. Being the Duggar cousin she didn’t have to abide by the strict rules that the other Duggars did. Amy could wear pants and even kiss before marriage. Wild!
In 2014, Amy even got her own TLC special entitled A Duggar Leaves Home. This special focused on Amy taking a shot at her dream of becoming a country music star.

Despite no longer pursuing her country singer career Amy has been a success. She owns a Bible-themed boutique called 3130 Clothing in Arkansas and is also a youth mentor.

But, most recently Amy gave birth to her first child in October 2019.

The ‘Counting On’ Stars’ Conversation

Okay Magazine reported that Amy tweeted at Anna at nearly 3 in the morning on January 27.  She wrote,“Are you up feeding Maryella? Like I am with Dax!? If so… miss you and you’re doing great mama!”
Amy went on to add, “I seriously don’t know how you do it all and still have time to look cute and even curl your hair! Teach me your ways!”
Anna then replied, “Yup… just finished feeding Maryella. I guess our kids are on a similar schedule. I hope you get some good rest tonight! Love you!”
That same day Anna went on to share a photo of her daughter Maryella. The mom-of-six was wearing a dress, had her hair curled and even on a full face of makeup.
On the other side of the spectrum, Amy has been posting candid photos and videos without makeup as a first-time mom.
Back in November 2019, Amy wrote on Instagram that “Pretty poses, makeup and photoshoots are great but it’s not real. Life isn’t perfect and I don’t want the people who follow me to think that!”
Kudos to both of these women as they navigate motherhood. I love how real Amy is being with her vulnerable posts. But, I am also impressed that Anna is finding balance in her days between her 6 kids and her self-care.
What do you think about Amy and Anna‘s different styles of sharing about their lives on social media? Let us know in the comments below!