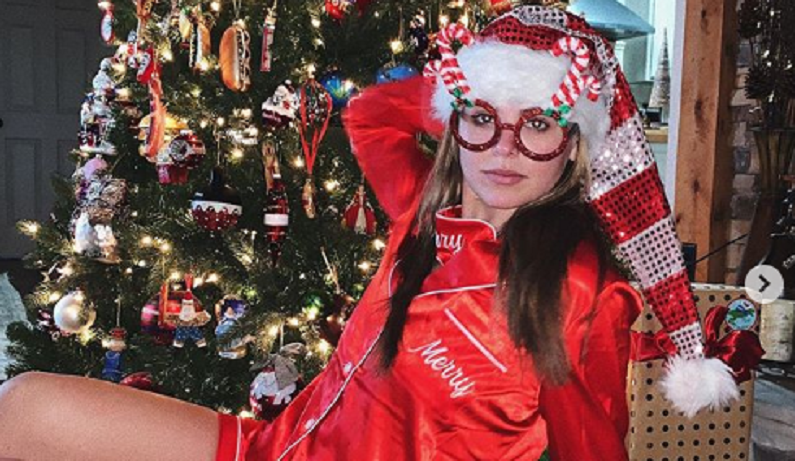 Hannah Brown is being tightlipped on her possible return to the mansion. She addressed the rumors whether she’ll return to both The Bachelor and The Bachelorette. It’s no secret that she’s gotten quite comfortable on these shows. She’s been making the rounds on ABC, and most of Bachelor Nation feels that enough is enough.

However, that hasn’t stopped the rumors from swirling that she could return to The Bachelor at the end of the season. Some Bachelor Nation fans feel that Hannah Brown will compete for Peter Weber’s affection once again. Others think she’ll pop up on the reunion special. And there are the rumors that she wants to become the next Bachelorette.

As Gold Derby reported, Bachelor Nation has been going crazy ever since she appeared on The Bachelor during the season premiere. She confessed to Peter that she still has feelings for him. This left him emotionally distraught and visibly confused. He almost considered leaving the show for Hannah.

Peter even canceled a group date. Then he asked Hannah to join the season, but they decided to part ways once again. That hasn’t stopped Bachelor Nation from wondering if she will return later this season. Rumors have surfaced that Peter plans to give Hannah his final rose. She was asked about those rumors in an interview with Entertainment Tonight.

“Wild. Y’all have to keep watching. Is that what we have to always say?” Hannah Brown jokingly asked.

Then she was asked whether she’ll pop up again on the series. That’s when she teased the possibility of her return. “I do not know,” she said with a smile.

It is highly unlikely that Hannah Brown will return later this season.  Since Hannah won DWTS and will be on tour, she won’t have time to appear on another Bachelor series.

Will she become ‘The Bachelorette’ again?

Her season of The Bachelorette ended in some drama. Hannah dumped Jedd Wyatt after she found out that he had a girl waiting for him at home. Would she return to the show to look for love again? Hannah teased the possibility some more.

“I don’t know!” Hannah exclaimed. But she still has negative connotations with The Bachelorette series because of what had happened. Hannah then hinted that these shows have a very low success rate. So, she’s not entirely sure if she would give it another shot, even if she did find love.

“I think it’s had a lot of success in the people that are together are very happily together,” Hannah continued. “So, of course, I want that, but it doesn’t have to be as the Bachelorette.”

She’s trying to “seize the opportunities that I have.” That means preparing for the upcoming Dancing with the Stars tour, which kicks off on Tuesday, Jan. 28. Hannah will reunite with her dance partner Alan Bersten. Due to her busy tour schedule, this will be her only public appearance.

She’s single and ready to mingle

It’s a good thing that she’s not tied down. Because her touring schedule could cause some friction with her relationship. Brown confirmed that she’s single despite the rumors that she could appear at the end of The Bachelor. As E! News reported, a fan asked Hannah about her dating life during an Instagram Live chat.

“Am I dating anyone?” Hannah said. “Nope.” She then talked about her doctor’s appointment and birth control when another fan asked if she was pregnant.

Bachelor Nation fans can finally close this chapter on Hannah’s relationship with Peter. Even though fans were holding out hope that the couple would get back together, it’s clear that their conversation on The Bachelor was more about closure. It’s probably best that Hannah stays single due to her busy schedule.

I don’t think I’ve ever been as happy for another human. Winning DWTS became a dream that I never thought I would have. For Alan, this is something he has dedicated his life to and it was really special to be hugging his neck while this dream came true. Thank you for your passion, your time, and your hard work. Thank you for caring so much about me and choreographing dances to make me shine. This really was an incredible experience and I’m very grateful to have you in my life— Now I guess we are stuck bugging the crap out of each other and hugging it out when we are over our stupid arguments. Woooo! #teamalanbamahannah forever

What are your thoughts on Hannah Brown? Do you think she should return to The Bachelor or The Bachelorette? Sound off below in the comments section.