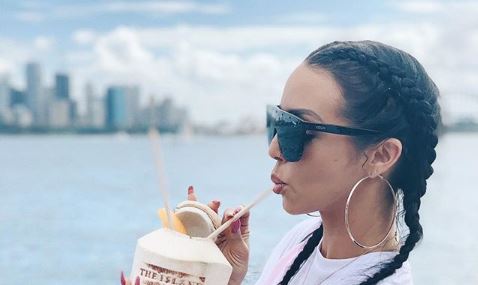 Vanderpump Rules fans aren’t warming up to new SURver Dayana Kathan. After the first three episodes of the new season, neither is Scheana Shay. The two women are battling for newbie Max Boyens attention.

However, there is another worker at SUR who has a connection to Dayna.

Season 8 of Vanderpump Rules including a moment of utter second-hand embarrassment. SUR manager Peter Madrigal sat down with Dayna to discuss their Season 7 hook-up.

Dayna was one of a group of women Peter brought back to the hotel room where he was partying with various co-stars. Jax Taylor, Tom Sandoval and Tom Schwartz were just a few of the witnesses to the incident.

Bravo cameras caught Dayna and Peter sneaking off to the bathroom. Co-star James Kennedy approached the bathroom door and made hand gestures to indicate Peter and Dayna were hooking up. However, nothing was mentioned further about it on the show.

Until Season 8, Peter was trying to clear the air with Dayna. Peter is a manager at SUR, which makes him Dayna’s supervisor. His intention was to make things less awkward, but the opposite happened.

there’s a first time for everything- LINK IN BIO! #vanderpumprules

The first episode of the new Vanderpump Rules season followed Dayna’s first day at SUR. She was trained by none other than Scheana, her romantic rival. Scheana was also training another new SURver, Charli Burnett.

While Scheana gave Charli a tutorial on serving customers, she had other ideas for Dayna. The Good as Gold singer assigned Dayna the task of polishing every wine glass in the restaurant. When she was done with that, Scheana told her to dust some shelves.

In her one-on-one confessional, the VPR newbie vented about Scheana’s attitude. She attempted to approach Scheana about it, but Scheana insisted the work had nothing to do with the Max situation.

Scheana was given the same work when she first started at SUR. Stassi Schroeder was in charge of training her. At the time, Stassi had a vendetta against Scheana over her affair with married actor Eddie Cibrian. The two have since become friends, so perhaps there’s hope for Scheana and Dayna.

During on Watch What Happens Live, Scheana passed responsibility for assigning Dayna busywork. Bravo’s The Daily Dish reports that Peter told Scheana to have Dayna do menial tasks. She said,

You know, in all honesty, Peter was the one directing me in the side work for her, so I was just doing what my manager said.”

The Vanderpump Rules star also said that Peter has ‘issues’ with Dayna for denying their hook-up.

TV Shows Ace reports that Jax plans to mention the hook-up issue at the Season 8 reunion later this year.