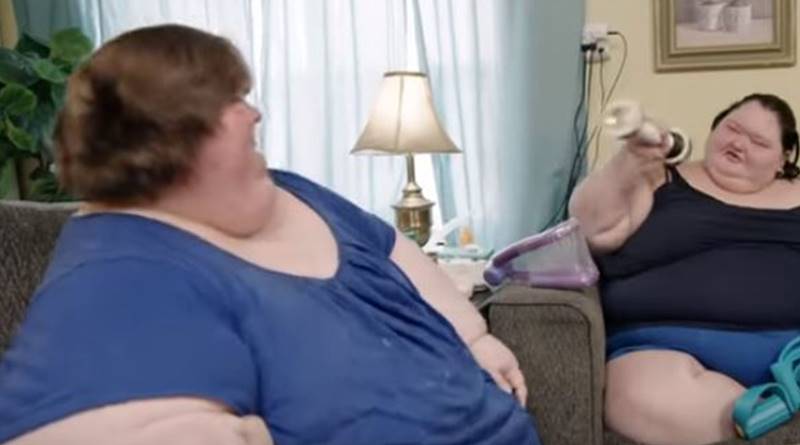 1000 Lb Sisters’ star Amy Slaton’s trying to shed weight. She and her sister Tammy jointly weigh about 1,000 pounds. And on their social media, they look much better than when we first saw them on the TLC show. In fact, they both lost some weight, which is good news. Especially for Tammy, who could barely move without the help of a walker. Now, someone took a video from Amy where she smoked weed and shared it on YouTube. Plus, they later did the same to Tammy Slaton. She slammed them for it.

Taking to her Snapchat, Amy said that someone taking her video for YouTube’s pretty “ridiculous.” Well, maybe she shared that on Snapchat as the video up on YouTube’s got comments disabled. Amy’s video shows her singing along and apparently smoking weed. Tammy’s video also shows much the same. It looks like Amy and Tammy and their family can’t even relax and enjoy some fun in the privacy of their own home. So, far TV Shows Ace only found one person who has the video on YouTube. And, luckily, it looks like reaching influencer status is about ten-light years away yet.

Yes, it’s one of those wanna-be YouTubers who put people down if possible. Of their seemingly rather feeble collection of videos, most of them consist of content taken from other people. So, there’s not a lot of creativity there. That might account for the grand total of 13 subscribers. The YouTube channel opened on January 12. In ten days, they accumulated 720 views off 14 videos in 10 days. That’s a reach of 51 views per video. So, if they hoped to portray the 1000 Lb Sisters as losers, well, they don’t look like half the success story Amy and Tammy became.

Amy and Tammy look like a success story in the making

TV shows Ace reported that both Amy and Tammy recently updated their social media profiles. Both of them look very different now. Both of them look way slimmer than fans saw on the show. In fact, they look heaps better than their older videos on their YouTube channel. Which, incidentally, got nearly 1.5k subscribers. It’s good, fans think, that these sisters take their health seriously enough to stick with their exercise and diets. Heavy also noted how well the sisters do at the moment. They wrote, “In addition to getting physically healthier, it appears that Amy’s self-confidence has also gotten a huge boost since she started losing weight.”

But, there’s always someone out there ready to look for flaws in reality TV personalities. Actually, the videos that were taken by someone else just shows the two sisters enjoying themselves. It’s not like they went out raving on the streets or anything. So, it’s no wonder that Amy tackled them on Snapchat. She didn’t direct people to the video, and neither will TV Shows Ace, to respect her privacy. But the 1000 Lb Sisters star told them off, and it looks like the YouTuber failed.

On her Snapchat, Amy said, “I think whoever took [my] video of me and my niece having fun and posted it on YouTube, is ridiculous.” She then noted, “Y’all just trying to get me into trouble.” Then, she spoke about how that won’t “work.” In fact, “TLC already knows” that she smokes “weed.” To finish up, Amy Slaton wrote, “So nice try boo-boo. it ain’t gonna work so I can keep getting me in trouble.”

What did you think about Amy Slaton hitting back and slamming the person who took her video and posted it on YouTube? Do you think they tried to get the 1000 Lb Sisters stars in trouble? Do you think it’s a big deal if these women find a few moments of fun and enjoyment in their lives? Sound off your thoughts in the comments below.

‘Sister Wives:’ Kody Brown Speaks Of Tensions When His Spouses Are Together
Is Robyn Brown Financially Independent Of Kody?
How Sadie Robertson Found Out She Was Pregnant
‘OutDaughtered’ Busby Quints Exposed To COVID-19: Who Tested Positive?
‘My 600-LB Life:’ Dr. Now Speaks About Cameo