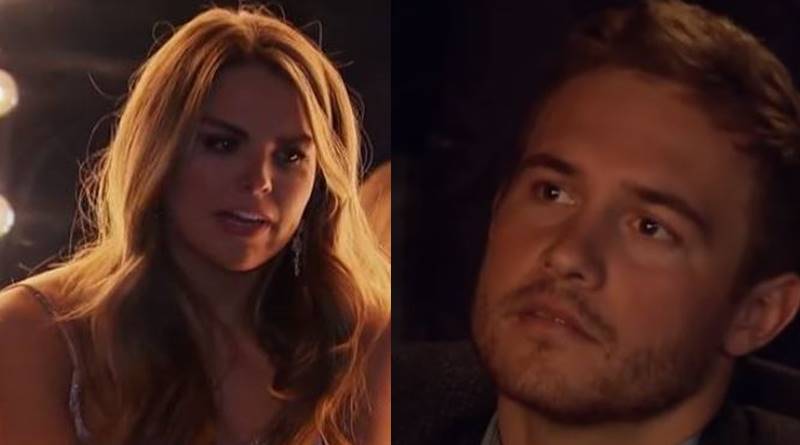 The Bachelor premiered and fans saw the first few episodes focus on Hannah Brown. In fact, she cried about it and ended up with mascara smeared everywhere. Eventually, Peter Weber asked her to join the house. But, she didn’t and went back to DWTS, to the relief of the other contestants. Now the show focuses more on the other women and Hannah B sounds relieved about it.

The Bachelor, contestants frustrated with Hannah B on the show, so was Peter Weber

TV Shows Ace reported that the other contestants understandably got frustrated and angry about Hannah in the new season. After all, she already had her chance with Peter Weber and sent him home. While some fans hope that in the end, somehow, Peter chooses her, others hope she’s done with trying to win him over. In our report, we noted that the women weren’t the only ones frustrated, as apparently, Peter is as well.

In a report by US Weekly, they mentioned that Peter spoke to them on January 16. Talking about the frustration of the other contestants, he said, “I mean I totally understood their frustration. I was just as frustrated, if not more.” In fact, he seemed very worried about how her appearance might impact the other women. He added, “In the back of my mind, I was thinking about them and what that was going to do to them.” And, in fact, maybe that actually brought a lot of insecurity as fans note how much crying’s going on with the new The Bachelor season.

Taking to her Instagram on Monday night, Hannah shared a photo of her smiling down, looking away from the camera. She captioned it with, “Enjoying this Monday night without mascara stained cheeks. 🥂.” Some fans grew critical of her, suggesting that she just posts this sort of thing to “stay relevant” to Peter’s season. But others understood her relief. However, others actually wish she remained on the show. They complained about all the crying that goes on.

One fan noted, “how is it only the 3rd episode and so much f*ckin crying… c’mon ladies, get it together.. peters gonna [tell] you all to go to h*ll.” Another agreed, writing, ” literally THREE episodes deep and these girls have me all ready to bring in a bus and drive them all home.” One Bachelor fan said, “I know. it seemed like they are all asking for sympathy from Peter thinking it will start a feeling from Peter. Gosh this is not real.”

What do you think about Hannah B seeming relieved that she’s not on the show for the time being? Do you understand that maybe she only went on it to fulfill her contractual obligations? Do you agree this season there’s way too much crying and insecurity from the other contestants? Could Hannah B appearing in the premiere have made them feel inadequate and like second-best in line for Peter’s affections? Sound off your thoughts in the comments below.