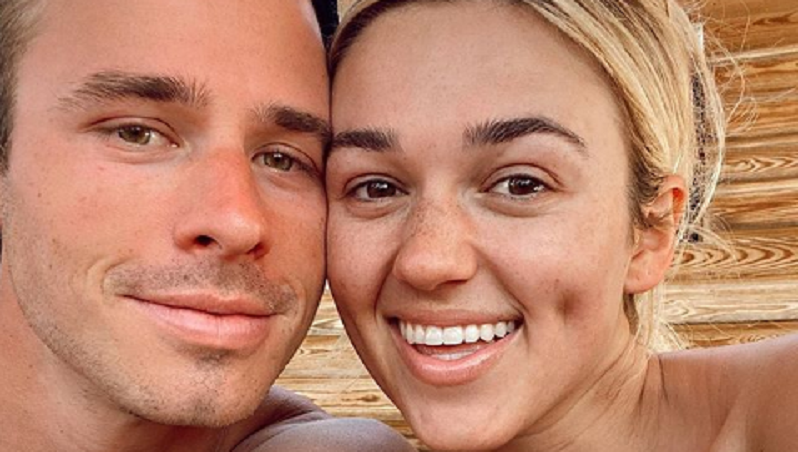 Sadie Robertson is sharing the intimate details on her marriage to Christian Huff. As TV Shows Ace reported, the couple got married on her family’s farm in Louisiana in late November. Their special day was an elaborate event that included star-studded guests like Candace Cameron Bure and Mark Ballas.

It’s only been two months, but the Duck Dynasty star is in wedded bliss. Sadie Robertson can’t stop sharing photos of their honeymoon and wedding. Now, she wants to give her fans a sneak peek at their special day.

She shared an intimate video of the couple kissing, walking down the aisle, saying “I do,” and their families praying for them. Sadie Robertson has already watched the video a hundred times by now. She concluded her post by writing “ALL THE FEELs.”

As reported via Yahoo Entertainment, the video also showed the couple dancing during the reception, which took place under a large white tent. The reality star took to the floor with her season 19 Dancing with the Stars castmate Alfonso Ribeiro for a special dance-off. Six hundred guests attended the wedding, which was located on the tennis courts. The guests sat on golden chairs with white cushions as they watched the couple express their love on a white stage.

Sadie Robertson credits Passion for bringing her and her husband together

The Live Original founder celebrated the new year by delivering a powerful message in front of thousands of young millennial Christians at the Passion 2020 event in Atlanta, Georgia. She revealed how the event brought her and her husband together. In a 35-minute speech titled “The Search is Over,” Sadie Robertson said that a commitment to Christ led her to find the right person.

She started her sermon with a verse from the book of John. Robertson explained that some of the early disciples such as Peter dropped everything to follow Jesus. The blogger said that the answers to most of life’s problems can’t be found on a Google search or social media but rather through Christ.

“You know, relationships nowadays a lot of the times start by a follow,” she said. “But there is a long process that goes from the follow to the actual commitment to being in a relationship with you. But here, there was no process. It was just like, ‘I’m just gonna follow you because you’re the Messiah.'”

Also admits her relationship was a process

As reported via The Christian Post, Sadie Robertson explained that her relationship with her husband was a lot of work. But it started with her following Christ. The couple “kind of got together” because of the Passion event, which is an annual gathering of young Christians founded by Louie and Shelley Giglio that launched in 1997.

“I love Passion and have been here for four years. Christian was attending and he somehow saw me. So he messaged me on Instagram. And it was a pretty bold message, OK?”

Robertson laughed then said that Huff’s message was in fact “sweet.” And when they met in person, she thought he was “pretty cute.” When she followed him back on Instagram, she noticed that he sent her a message two years prior to their meeting. She revealed that their relationship was the “most stereotypical Christian relationship start.” The couple had regular conversations on dating, engagements, and marriage most of the time.

The couple wasn’t official until they went on a series of dates. It was a process that included lots of conversations in their future. Robertson also credits God for bringing her and Huff together but admits that their entire courtship was a process. That’s also the point when they both made the decision to drop everything to follow Him.

What are your thoughts on Sadie Robertson and Christian Huff’s marriage? Sound off below in the comments section.