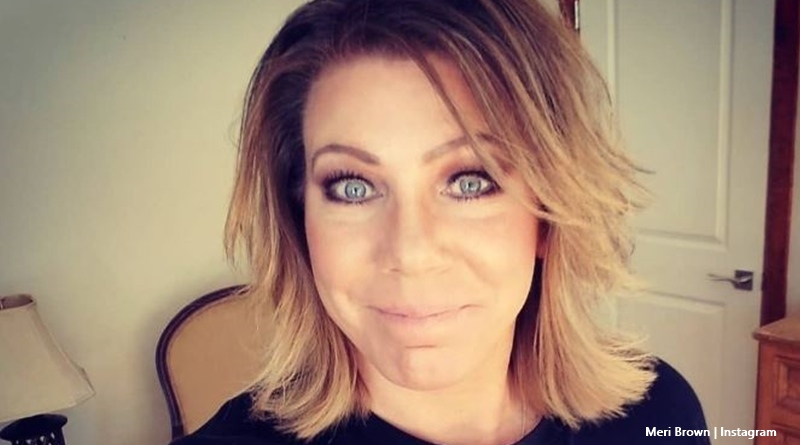 Sister Wives fans hoping that Meri Brown’s making a dash for freedom from Kody and the other wives might feel a bit disappointed. She just told her followers that she’s in it “for life.” And, when fans questioned if Meri’s divorce from Kody’s recognized, it seems the Brown family doesn’t recognize it.

Meri Brown took to her Instagram on Saturday and shared a picture of a fun t-shirt from her friend Blair. She captioned it with, “Shout Out Saturday to friends! Friends old and new, young and old, near and far.” Meri mentioned, “Friends to laugh with, cry with, be with.” Plus. she added, “Friends who are your people. The best kind of friends.” Then she gave Blair a shoutout as he’s “all the way across the world.” But he thought of her and sent the “panda t-shirt.”

Loads of people loved the shirt. But, one fan thought Meri took the picture in Robyn’s home because of a small photo in the background. Meri pointed out that actually, she loves the photo. It shows her and Kody, and she said, it’s one of her “favorite pics with him taken about 10 years ago lol!” So, obviously, she still treasures her man. But then, the Sister Wives star answered another question and it indicates a lifetime commitment.

Another fan of Meri asked her on the post, “Are you still one of the Sister Wives Meri?” Meri replied and said, “Yes ma’am.” She added a heart emoji, as well. But, the hashtag told a bigger story. She put “#SisterWifeForLife” at the end of her comment. So, that seems rather definite that Meri plans no breakout, despite the problems we see between her and Kody on the current season. TV Shows Ace reported that the Brown family simply doesn’t recognize Meri as divorced, referring to the legal document as a “piece of paper.”

Ever since the divorce and the catfishing incident, Sister Wives fans urged Meri out of this relationship with Kody. Today, they still urge her to free herself from the other wives as well. The new season shocked some fans. They saw Meri bullied out of her home in Flagstaff. None of the other sister wives took her in so she returned to Las Vegas.  InTouch Weekly noted that Meri said. “If I cave and I let them bully me out of this house, then they win.”

So, will Meri ever let the other wives and Kody “bully” her away from their family? It sounds like that’s not gonna happen. What do you think about Meri Brown saying she’s a #SisterWifeForLife? Sound off your thoughts in the comments below.