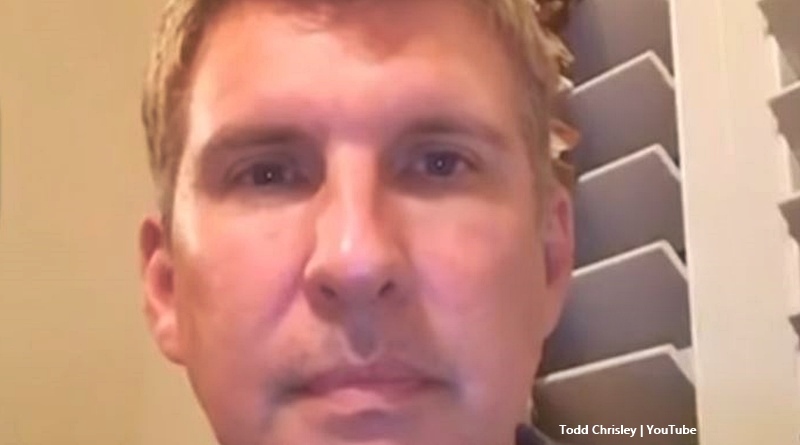 Todd Chrisley seems determined to make this weekend a Nanny Faye tease. Luckily fans know she’s got as much of a sense of humor as he has. After all, he had to learn it from someone.

His sense of humor tends to shift when trolls get on his social media and he smartly puts them down. On Friday, he took to Twitter and shared about his aged “teenager.” And, on Instagram, he teased about Faye making off with Nic Kerdiles, Savannah’s fiance.

Fans love Todd because he’s always pranking or posting amusing things on social media. But, he’s very quick to put any trolls in their place. TV Shows Ace reported that this week, he told someone off who trolled about his son Kyle. Todd wrote, “you just can’t fix stupid, and you are proof of that.” But, even when he hammers at trolls, fans still get a laugh out of him. And, this weekend it looks like Nanny Faye’s his target for the funnies.

Over on Twitter, Todd Chrisley shared a short video of Nanny Faye and the family out tobogganing. He captioned it with, “This is why I can’t have any peace, my 75 year old teenager has escaped my custody.” Then he used the hashtag “#nannyfayeontherun.”

Fans responded, with one saying, “Your mom is an amazing person. I love her zest for life, her smile, her anecdotes — she’s awesome.”

Another one posted, “Boy they are flying down that slope. I love her spunk! She 🤣❤️ is living the best of her life to the fullest! No worries and enjoying what she’s doing. ❤️❤️❤️❤️.”

This is why I can’t have any peace , my 75 year old teenager has escaped my custody .. #nannyfayeontherun pic.twitter.com/vMLx8oc7tg

Not done with teasing Nanny Faye yet, Todd also shared a picture on his Instagram. In that post, the picture showed Nic Kerdiles taking Nanny Faye by the hand as if escorting her. Todd captioned it with, “It’s official, @nannyfayechrisley has taken @savannahchrisley man @nickerdiles .. does my heart good to see how much they love each other .. @savannahchrisley stop crying, there’s other fish in the sea.”

Fans love Nanny Faye so much that they got to talking about her. They admire that she’s active and into everything with the family. If you’re not sure why they call her “Nanny,” Faye, portrays “the role of Nanny in the American TV series, Chrisley Knows Best.”

Reality Star Facts notes that she’s “Todd Chrisley’s mother.” She certainly a strong personality and Todd may have gotten his playful ways from her. She plays a big part in both the reality TV show and in the life of her family.

Fans also appreciate Faye so much. As one fan said, “Nanny Faye is the truth! Lol 😂 I love watching her! She gives me life!” What do you think about Todd Chrisley teasing Nanny Faye this weekend? Do you love that she still gets active like a “teenager?” Sound off your thoughts in the comments below.