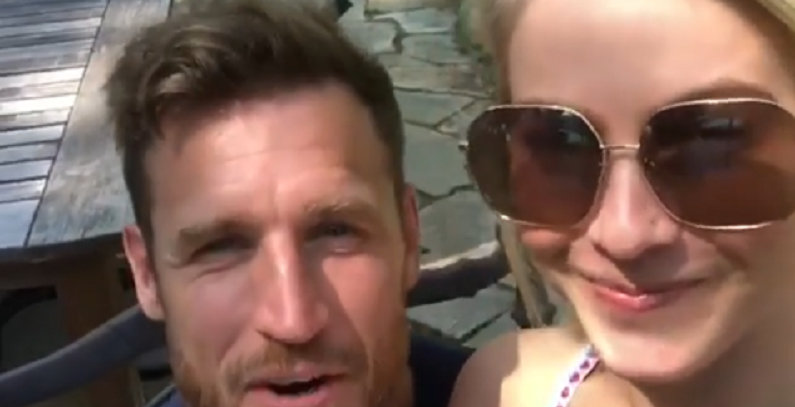 Julianne Hough and Brooks Laich have been the center of conversation since last summer. Fans have speculated whether the two are headed for a divorce. The professional dancer made some interesting remarks about their marriage in recent interviews. Meanwhile, her husband is talking about starting a “new stage of life.”

This comes after the former DWTS pro was spotted without her wedding ring. These recent events have the rumor mill talking again. Fans are now wondering if the couple has reached the end of their marriage.

Brooks Laich reveals his “new stage of life” on Instagram

He posted a cryptic message to Instagram, as reported via Us Weekly. The post in question appears to be a reflection on the previous year as well as the year ahead. Laich wrote that his friend inspired him to choose a word for the upcoming new year. He chose the word “boundless” because he feels he’s not defined by the things in his life.

“In 2020, I look forward to releasing old identities, and stepping into a new chapter in my life,” he wrote. “I feel a new stage of life calling me, and though I don’t exactly know what it is yet, it feels right and exciting!”

The retired athlete revealed that he loves “coloring intricate mandalas” and “reading,” which are activities that are not common among men. He concluded his post by saying that he’s “‘boundless’ and on a new journey.” This Instagram post comes after he shared his new year’s resolutions on his Instagram Stories on New Year’s Eve. He wrote that he’s “open to all things and present in my relationships” and said that he wants to know “more about intimacy and my sexuality.”

Like Laich, Julianne Hough has been busy posting to her Instagram Stories and feed as well. She shared a photo of herself in which she’s without her wedding ring. The most recent footage was posted on Saturday, January 4, in which she explained her new fitness project, Kinrgy. Prior to that, she posted a video of herself on Christmas Eve decorating her Christmas tree and without her wedding ring once again.

Julianne Hough said her sexuality brought them closer together

Back in August, she opened up about her journey of self-discovery since marrying Laich. Hough said that she’s undergone a “massive transformation” two years into their marriage. She revealed in the September 2019 issue of Women’s Health that she feared that her new outlook on life would drive them apart. A big part in her journey of self-discovery was talking to Laich about her sexuality.

& it’s just the beginning… ✨ To learn more about the conscious decision I made to be on @womenshealthmag #nakedstrength cover, head over to @kinrgy where I will share more on the transformational journey I have been on this past year and how I got to where I am now spiritually, mentally and physically. Head over to @kinrgy and join the movement! 📷: @brianbowensmith

Hough grew up in a Mormon household in Salt Lake City alongside her brother, Derek. She said that she had to work on her childhood experiences before she came to terms with her sexuality. Hough experienced a lot of “shame” and “guilt” over her sexuality from how she was raised. While she didn’t want to unload these feelings on her husband, she wanted to be upfront and honest with him.

In a July episode of his iHeartRadio podcast How Men Think, Laich said he originally believed that not taking his last name would become a problem in their marriage, as reported per People.

“I don’t find it disrespectful,” he said. “I’m obviously open to it, but at the start, yeah, it was a little jarring for me.”

Laich admitted that he looked forward to the day when Hough would decide to take his last name. But the ice hockey player revealed that it didn’t turn out as planned. It’s been an “ongoing discussion” for the couple ever since they got married. While they never “resolved the issue” by the time they got married, they’ve continued to talk about it over the past two years.

Laich also revealed that he’s unsure whether their future children should take his last name. Or, they could find a way to include Hough’s last name. He still hopes that she will change her mind and decide to change her last name to Laich.

It’s clear that this couple doesn’t see eye-to-eye on everything. However, that hasn’t stopped them from communicating about these issues, including intimacy.

What are your thoughts on Julianne Hough and Brooks Laich? Do you think the couple is approaching the end of their marriage? Sound off below in the comments section.