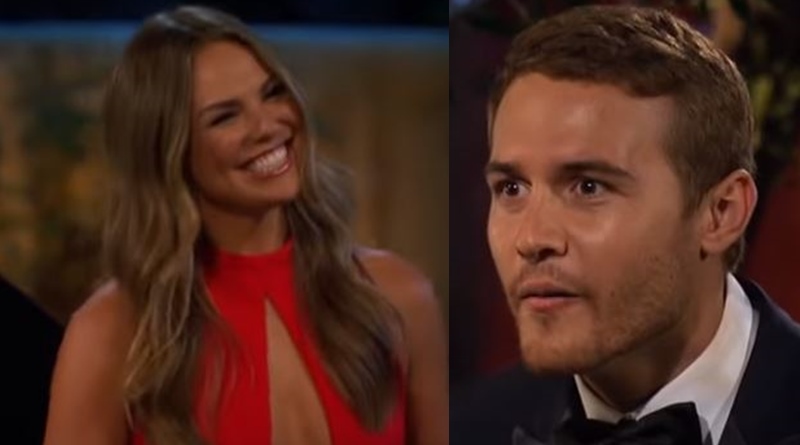 The Bachelor fans think they already got the whole story and Peter Weber chooses Hannah B in the end. And, judging by the emotional premiere, that looks almost certain. But, Peter Weber’s determined that absolutely nobody will spoil his season of the ABC show. So, surely it can’t be that easy to predict the outcome?

The Bachelor – Hannah B embarrassed about being on Peter’s season?

TV Shows Ace suggested that after the premiere, Hannah Brown sounded rather embarrassed about being on Peters’s season. Actually, as it turns out, so did reality TV guru, Reality Steve. In our article, we noted, “Hannah saying she just wants to “go hide under the windmill right now,” might indicate she’s terribly embarrassed. It’s almost as though she’d rather not be a part of Peter Weber’s show at all.

Meanwhile, on his blog, Reality Steve said, “[Hannah] Sounds more like someone who’s embarrassed at how she came off last night rather than someone who’s secretly in a relationship with Peter right now.” His conclusion also came after a number of tweets that Hannah put out during and after The Bachelor premiere. He cited this one as one example, “it truly was my peak. It was all down hill from there. 🙃🥀.”

it truly was my peak. It was all down hill from there. 🙃🥀 https://t.co/LrbUvrQsSo

On Twitter, numerous fans assume that Peter Weber’s going to win the heart of Hannah. One fan wrote, “Wait…. what if when peters mom says “go get our girl” she was telling him to go get Hannah B bc he’s not over her and never fell out of love.” There’s a lot of what-ifs on the subject. But, others express even more positive feelings. This tweet read, “My official prediction: Peter decides to get back together with Hannah and they cancel his season. They send all the girls home and reveal the real bachelor for this season is Tyler. ABC will officially pull off the greatest twist in bachelor history.”

Then, a Bachelor fan tweeted, “Let’s be honest Hannah B. and Peter are ENDGAME.” But Reality Steve says many more such DM’s came in on his accounts. Yet, he feels people are missing something. He doesn’t know for certain if the show works out the way people predict. He wrote, “I don’t know, but I don’t think so. And here’s why…” Next came a lengthy blog, including the fact that Hannah came across as “embarrassed.”

I just want to go hide under the windmill right now. #TheBachelor

Hannah on Dancing With The Stars

Hannah Brown was busy filming for DWTS during the Australian final rose ceremony. Steve noted the date that took place was on November 17. But Hannah worked on the DWTS show right through that month. Even Hannah said on Twitter that people should do the math on that one. In fact, both The Bachelor and DWTS were filmed during this time and Hannah couldn’t be in two places at once.

We know that Hannah ends up not going into the house. That doesn’t mean she might not show up later, but that’s not predictable at this time. Technically, we could see Peter choose someone and then dump someone in a replay of Hannah’s The Bachelorette. Reality Steve suggests this isn’t the run of the mill ending this time. There’s certainly potential for an upset during After the Final Rose. After all, Hannah only needs to call Chris Harrison and tell him she really wants another shot at Peter. But, really? Nobody knows, but that seems unlikely.

Spoiler alerts: This is going to be very freaking awkward. @BachelorABC

Peter seems in love with someone but not Hannah B

Certainly, right now, Hannah sounds on social media as anything but in love with anyone. Meanwhile, The Bachelor‘s Peter seems delighted with the way the season all worked out. So, maybe one of the other contestants actually stole his heart. What do you think? Do you feel it looks simply too tidy that Hannah B shows up, Peter gives her his heart and they sail off into the sunset? Sound off your thoughts in the comments below.