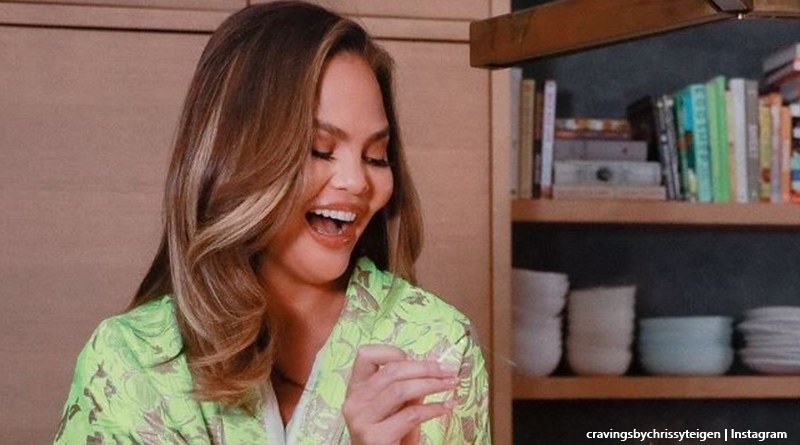 Chrissy Teigen fans love that she’s got a wonderful sense of humor. And, on her Cravings page on Instagram, she posts all sorts of things about food. The fun side of it is that she posts fails as well as good advice. And, fans love that they can join in and banter about things. This time it was about snacks and night eggs.

Who would expect to find a social media site of Chrissy’s and discover only serious stuff? That’s not likely, as fans know she’s got a huge sense of humor. And, her newish Cravings By Chrissy Instagram account delivers plenty of that. TV Shows Ace reported in mid-December, that Chrissy “shared a food fail photo and invited fans to send in their own.” Fans loved that and plenty of them described their own fails. The site originally got created in support of her rather serious kitchen & tabletop collection at Target.

Foodies enjoy going to the site, but they equally love the chance to chat with Chrissy and laugh both at her and with her. And, also at themselves. Plus, her humor’s not confined to Instagram. Bored Panda reports that she’s also the unofficial Queen of Twitter, with millions of loyal subjects hanging off her every golden tweet. In fact, they shared a list of 148 times that Chrissy made people laugh on her Twitter with either posts or comments on her posts.

On her Instagram on Tuesday, Chrissy shared a post by someone else that read, “ME” I’m gonna get some snacks. What should I eat? My Organs: I’d love an apple. ME: I said snacks.” Chrissy captioned the post with, “define snack 🍔…” One fan suggested, “What about two night eggs?” But, for Chrissy that never qualified as a snack. Instead, she placed them in a main food group. Fans laughed at her answer.

Chrissy Teigen wrote, “Night eggs are their own meal category independent of snacks🥚 (Breakfast, snack, lunch, snack, dinner, dessert, night eggs)…” Fans started laughing and joking about snacks and night eggs. When one fan said, “I need to know what night eggs are, stat. ❤️ A fellow fan responded with, “night eggs are life 🙌🏽.” Another fan noted, “I’m so intrigued by night eggs. Like I need this to be a part of my life. About to go eat some night eggs 💃🏼💃🏼💃🏼.”

Other snack suggestions and banter that Chrissy enjoyed with her fans

Other suggestions got Chrissy’s attention as well. One fan suggested “A bag of chips and some kids gummy snacks 🙈🙈🙈.” Chrissy decided that was a “good sweet and salty combo.” So many times she commented on what her fans suggested; from oranges to chocolate, and more. And that’s why fans love her.

But it seems one fan needs some serious help. They wrote, “You know… I just said I’m gonna have some tea… popped a pomegranate flavoured green tea in a cup with a cinnamon stick. By the time the water heated in the kettle there was a packet of hot chocolate in the same cup🤦‍♀️ need help here.”

What do you think about Chrissy so often laughing and joking with her fans on social media? Do you sometimes visit her pages for some light relief, like some banter about snacks and night eggs? Sound off your thoughts in the comments below.