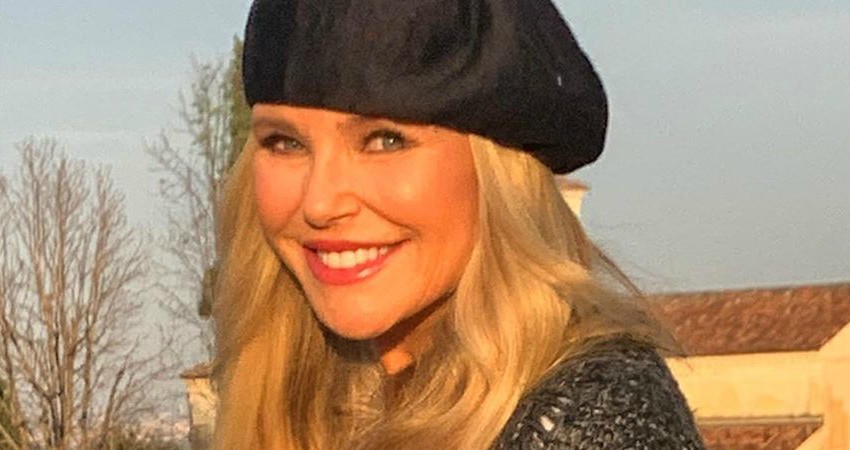 Dancing With The Stars fans are loving Christie Brinkley’s new bikini selfie. And it’s not just because of her amazing body.

It’s a double standard in the entertainment industry rarely discussed. Women are expected to dye their hair well into their 50s. Meanwhile, men who stop dyeing their hair are celebrated as “silver foxes.”

A former Dancing With The Stars contestant is going against the grain – or should we say strand?

Over the weekend, former Cover Girl model Christie Brinkley posted a bikini selfie on Instagram. At first glance, many fans thought the snap was of her daughter, Sailor Brinkley-Cook.

Stunning in a black and white bikini with a white scarf around her middle, Christie had a question for her fans.

The icon revealed that she recently decided to “go easy” on her hair and was taken by surprise by the roots (aka “nature’s highlights”) that grew in silver instead of the usual goldish blonde.

“Embrace the silver? Or go for the gold?” is the question Christie posed to her followers.

During her very brief tenure on Dancing With The Stars, Christie was paired with Val Chmerkovskiy. Sailor took over when Christie was forced to leave the show after breaking her arm during rehearsal.

In response to Christie’s selfie, Val called her a “timeless treasure.”

I was scheduled for color before I left NYC 3 weeks ago but decided I would go easy on my hair and just do it when I got home … as a result I have gone back to my roots …and boy was I was ever surprised to see my “nature’s highlights” are more silver than gold ! Sooo what do you think ? Embrace the silver ? or go for the gold? I have to decide because Wednesday I’ll be on @qvc with my @bellissimaprosecco and I’m excited to say I’m bringing all 3 of my delicious wines to you plus my #bambinis and #goldensippers All at special prices #werethegrapest #organicgrapes 🍇#fromshellstosales lol! #haircolor #hair #specialdeals

Katie Couric is a beloved news anchor who spent 15 years on the Today show. She is well-known for her short, blonde hair that has remained the same style for her entire career.

However, it seems that Katie is ready for a change. After leaving NBC, she briefly worked at CBS. She anchored online news for Yahoo until 2017. At the moment, she is out of the public eye but plans to release her memoir in 2021.

Commented on Christie’s silver selfie, Katie made her a promise. “If you do it, I’ll do it.”

Katie received the same encouragement Christie did. It seems fans are digging silver ladies in 2020.

Emma actress Gwyneth Paltrow’s gold gown at the Golden Globes may have made the worst-dressed list. But her silver roots peppering her parted hair stole the show.

In 2016, the Goop founder admitted to People that she has grey hair. She said,

“Of course I have wrinkles [and] gray hair. But I genuinely love it. This is who I am.”

While some photos before the 2020 Golden Globes showed some silver roots, they are more obvious than ever before.

Gwyneth has a new Goop documentary dropping on Netflix on January 24th. Yes, the poster is what you think it is.

Gwyneth Paltrow welcomes you to The Goop Lab on January 24 pic.twitter.com/ZzeEEbAy9L

Dancing With The Stars returns to ABC later in the year for Season 29.