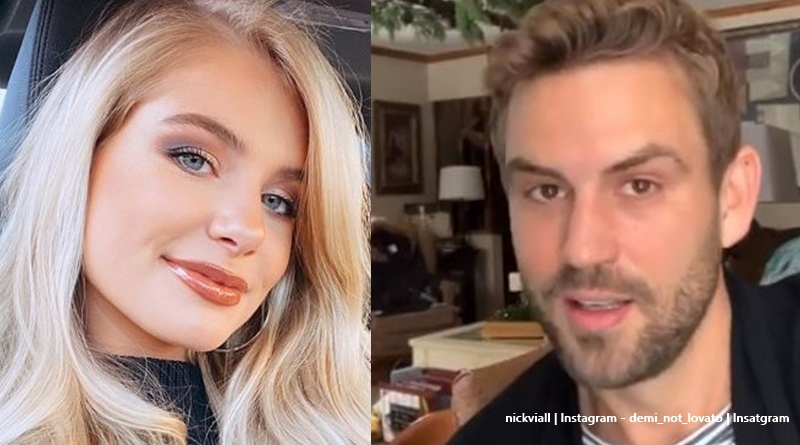 Bachelor in Paradise fans know there’s been no shortage of dating rumors surrounding Nick Viall in the last few months. These included Rachel Bilson in early December when they went for dinner  And, of course, fans know his engagement to Vanessa Grimaldi never worked out. In November, rumors arose that BIP stars Demi Burnett and Nick dated. But, he denied being more than friends with her. Now, they rocked it up together at the Golden Globe Awards.

TV Shows Ace noted that the chances of the Bachelor In Paradise stars dating in November were slim. After all, at the time, she was with Kristian Haggerty. But, they have since broken off their relationship. Seen holding hands at Halloween, it emerged that Nick and Demi are just “besties,” according to Bachelorette’s Hannah Brown.  But around the same time, rumors of a relationship with Rachel Bilson arose.

US Weekly noted that Rachel Bilson appeared on Nick’s podcast, the Viall Files. As the two stars then got quite flirty with each other on social media, fans assumed they dated. But, once again, it looks like BIP‘s Nick just has a friendly relationship. The outlet said that Nick seems a bit hesitant about rushing into a relationship. He said, “I’m certainly hoping to settle down when the right person comes.” But he doesn’t want to put “pressure” on himself. It looks like if it happens, it happens.

Demi Burnett at the Golden Globe Awards with Nick Viall

Fans of Bachelor Nation got excited when they heard that Demi Burnett and Nick Viall planned on appearing at the Golden Globe Awards together. Demi shared about it on her Instagram Stories. In another post, she wrote, “Golden Globes bound ft Elsa ❄️ 📷: @nickviall.” Demi looked stunning in her blue dress. Of course, the Nick Viall connection interested fans. One wrote, “this would be a [BIP] dream come true.”

Another fan noted, “i like where this is going.” In fact, lots of fans hope that Demi and Nick really get something going. “ok ok here for this tho,” said one. Another chipped in with, “Let it Globe….. Let it Globe ❄️.” But, some people took the opportunity to say not such nice things. One critic wrote, “Why are you with nick so much Demi he is not It Hunny You are OUT of his league.” Ouch! But overall, BIP fans echoed this sentiment: “Can her and @nickviall pls be a couple already!? 😭.”

What did you think about Nick Viall and Demi Burnett attending the Golden Globe Awards together? Do you hope they finally just get on with it and become an official couple? Sound off your thoughts in the comments below.