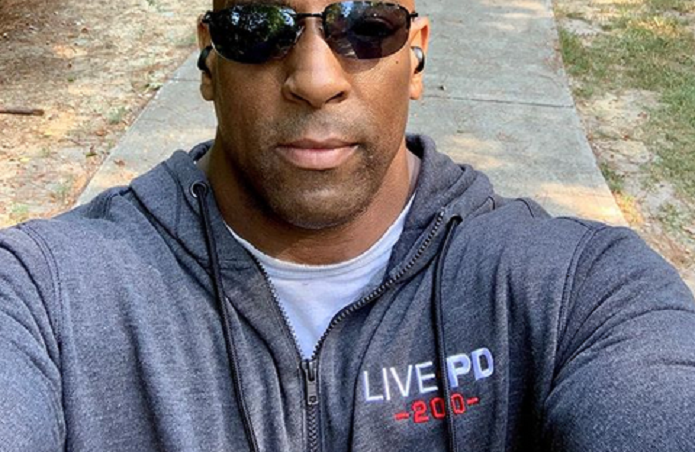 Live PD fans fell in love with Richland County Deputy Garo Brown’s lovable character and sage advice. While he has a lot of love for the A&E show, he has to move on from the series. The deputy is known for his gigantic biceps and muscular frame that makes some shake in his presence. His final television appearance was on the Dec. 13 episode of the popular reality series.

Deputy Garo Brown is the latest police officer to receive a promotion. Sheriff Leon Lott has promoted Brown and taken him off the streets. Instead, he’ll be working behind a desk. Brown will be working as an investigator without the bulletproof vest, strap, and belts needed to patrol the streets. While he doesn’t know what he’ll be investigating, he says that he’s “looking forward to the new challenge.”

That means Live PD viewers will be losing one of its favorite deputies. Brown started working as a deputy for the Orangeburg County Sheriff’s Office back in 2000. Live PD fans first saw him in the second season of the show. Brown admitted that he never thought he’d end up on a show like Live PD. But he fell in love with the show, including its authenticity.

“I never thought I’d be something where they follow you live with cameras,” Brown told The State.

His impressive fame made him popular among fans. Despite his newfound fame from being on Live PD, Brown revealed that he was more impacted from the appreciation of fans.

“Just the outreach of people that contact you and say ‘thank you for your service,'” Brown said.

Even if he’s not patrolling the streets, Brown says he’ll still have a close connection to the communities he worked in.

Jefferson’s County time has also come to an end

In early November, Live PD claimed that it now follows 12 counties but it is now down to 11. The Jefferson County Sheriff’s Office also revealed that their contract with Live PD has ended. Officials told AL.com they’re not sure if they’ll return to the popular series.

“The Live PD season is over, and our contract has ended,” said Chief Deputy David Agee. “They (the show) start back in January, but we have not renewed our contract.”

The A&E show has been closely following the Sheriff’s Neighborhood Enforcement Team. Their contract was initially for eight to 10 weeks and their last appearance also took place on last Saturday night’s episode. Jefferson County deputies feel that they showed too much action that could be dangerous.

“That’s a different visual than they usually get,” Agee said. “We wanted to be more informative than entertaining.”

When does ‘Live PD’ return?

According to Broadway World, A&E’s hit documentary will return with new episodes on Friday and Saturday on Jan. 3 and 4 at 9pm ET. As an effort to kick off the new year, A&E will air two bonus episodes of Live PD on Wednesday, Jan. 8 and Wednesday, Jan. 15 at 8 pm.

Check back with TV Shows Ace for more news and updates on Live PD.