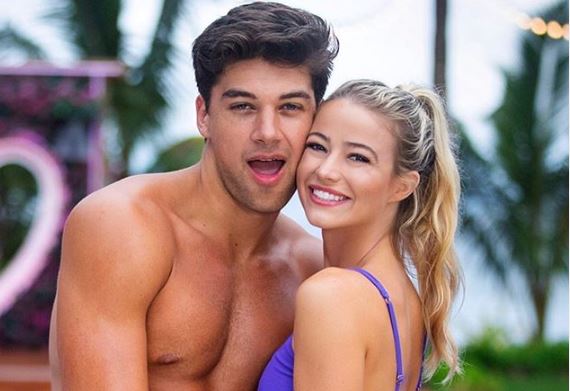 Love Island couple Zac Mirabelli and Elizabeth Weber have called it quits. This couple met on the show and fans really did think they would make it. Now, they are both sharing that things are over. Zac and Elizabeth both went to their Instagram Stories to share what happened.

Love Island couple is over

Zac went to Instagram explaining that they made the decision to share the news with fans. You can see what he had to say below. 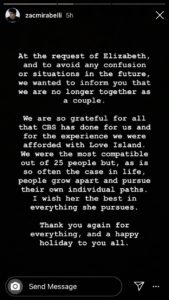 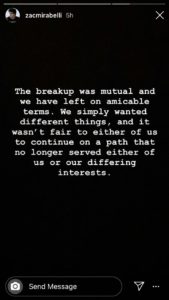 It does sound like this decision was one that they made together. Zac isn’t explaining what they felt that was different. They were doing great, but this Love Island couple is done now. 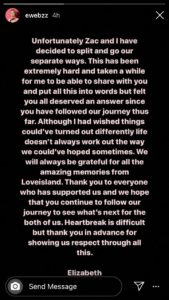 It really does sound like Zac and Elizabeth broke up a bit ago, but waited a while to tell fans about it. Maybe they were trying to see if they could work it out or not. Regardless, things didn’t end up lasting for these two. Because of this split, they may not be updating fans near as much on social media.

How are the other couples?

Alex and Dylan already shared that they split. This was the other couple that fans really thought would last. It turns out that Kyra and Cashel seem to be doing great. This couple already lived near each other when the show ended, so that had to help make things a bit easier on them. It would be interesting if they decided to bring any of these people back on the show next season as a single to try and find love again.

Fans are shocked to hear that this Love Island couple is over. Alex and Dylan already shared that they didn’t last either.