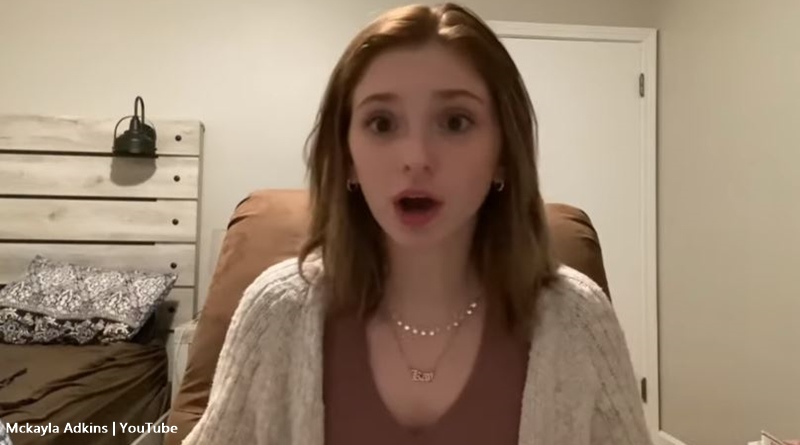 Unexpected star McKayla Adkins has been talking about some extremely personal stuff on her YouTube channel. The young mom’s candid and opening up about many questions parents and teachers may hate answering. Actually, her sharing those things with fans who really need to know, is admirable. One thing she mentioned in her latest video revolves around birth control. McKayla’s getting her IUD removed.

Unexpected – Mckayla Adkins gets candid with Girl Talk: Way Too Much Personal Info

Fans of the TLC show often grew irritated with McKalya during the last season. She and Cealan already made one baby, Timmy, and then she fell pregnant again and Gracelynn arrived. TV Shows Ace reported, “McKayla does not want Caelan to see the kids. With all of her drama, it is difficult for Caelan to communicate with her.” And, the drama came along week after week. Immature and demanding, declared fans on Twitter. But, these days she seems to be growing up a lot.

Distractify reminds us, “During Season 1 and 2, [of Unexpected] we followed the couple moving in together and their plans for marriage, to the eventual breaking up and moving apart. This became an ongoing cycle.” In fact, we heard they split again. But, then they got back together and now live in their own home. McKayla spoke about why they got back together on YouTube. But, she shared many other things over there. And recently, she started her Girl Talk: Way Too Much Personal Info series.

McKalya takes questions from people, and many of those come from teenagers. These vary from things like postpartum intercourse, through to vaginal cleanliness.  These questions probably have parents cringing, but she seems able to answer them with a level head, and informatively. Naturally, one question she often gets from Unexpected fans relates to birth control. After all, she fell pregnant more than once. According to McKlayla, she struggled with hormonal pills. But then she tried an IUD.

Insider explains that it’s quite a safe method of contraception. They noted, “your chance of getting pregnant with an IUD is 0.1% to 0.2%. So, for every 1,000 women with an IUD, one to two of them will become pregnant.” McKalya explained that she experiences problems, however. She said, “I bleed nonstop.” And she added, “I don’t think you should even think about that.” McKayla says she’s going to take herself off of contraception and “be careful.” They’ll try using condoms. Apparently, birth control just doesn’t seem to work for McKayla.

The Unexpected star turned off comments on her YouTube video. But, she answered a fan on her Instagram Q&A. The fan noted that she should maybe hold on with getting the IUD out. But McKayla explained, “I randomly get bad pains in my lower stomach and back.” She added, “Last night I could barely breathe…This is another reason I want it out.” 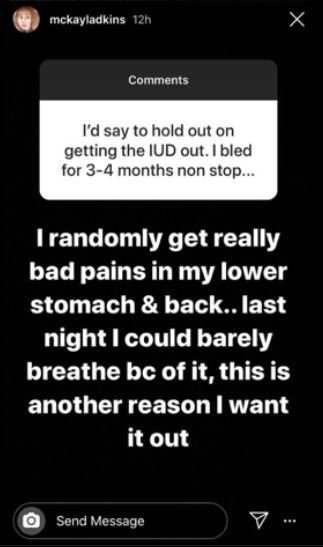 What do you think about McKayla Adkins getting so candid about personal things on YouTube? Are you surprised at her maturity when discussing these issues? And, what about the IUD removal? Do you think she should stick with it a bit longer? Sound off your thoughts in the comments below.

‘Autopsy: The Last Hours Of Dean Martin’ Where To Watch, What To Expect
Netflix Reveals If It Will Save ‘Manifest’ From Cancelation
Khloe Kardashian Flaunts Revenge Body Amid Tristan Thompson Split
Astrid Loch Bump Watch, ‘The Bachelor’ Star Is Popping
Kim Kardashian Puts Hourglass Figure On Display In Sheer Black Dress