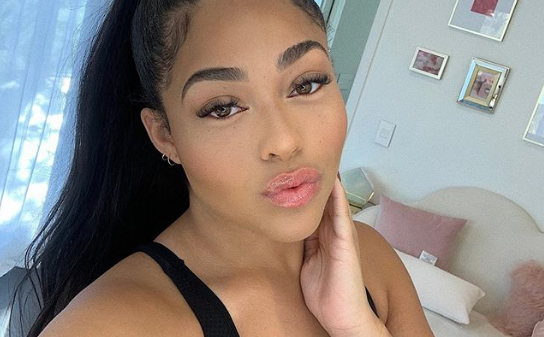 Did Jordyn Woods fire back at Khloe Kardashian on social media? Reports surfaced that the two were feuding again on Thursday night, December 5. It all started when Khloe wanted to make peace with Kylie Jenner’s former BFF. Then Jordyn wanted to share her input on her Instagram Story. This back and forth led fans to believe that the two were beefing once again.

Jordyn Woods claims she has nothing but love for Khloe Kardashian

It seems like celebrities are notorious for posting cryptic messages on social media. Khloe kicked things off when she revealed that she has since forgiven Tristan Thompson and Jordyn Woods without mentioning her name. In case you didn’t know, the two were caught in a cheating scandal earlier this year that ignited social media. Khloe’s post caused Jordyn to share a cryptic message to her own Instagram Story, which fans believe is a response to what Khloe said.

The quote in question was reshared from another Instagram account that read, “Someone somewhere is still discussing the old you because they don’t have access to the new you.”

We sold out QUICKLY the first time we dropped this leopard 🐆 jumpsuit. Well, We just restocked it! Head on over to GoodAmerican.com 🐆

Jordyn added her touch to the post by including the caption “Facts.” Fans scrambled to Jordyn’s Instagram account to figure out what she really meant. Shortly after posting the message, Jordyn insisted that the message wasn’t even about the Keeping Up with the Kardashians star. She insisted that she has nothing but “love” for Khloe, according to People.

“Not every quote that is posted is a sub or a ‘clap back’ and not everything posted is directed towards one person in general,” Jordyn wrote. “I deal with a lot of s*** daily. It’s all love. Only positive vibrations.”

Not only does Jordyn want to stay on Khloe’s good side, but she also wants to stay on Santa’s nice list. The 22-year-old doesn’t want to receive a bag filled with coal for the drama that she’s put everyone through this year.

those that counted you out, can’t count 💋

Jordyn took to Instagram to ask her followers if she would end up on the naughty or nice list. Sixty-one percent of fans voted “naughty,” according to Page Six. It looks like not everyone has forgotten about Jordyn’s alleged tryst with Tristan, even if Khloe has forgiven and forgotten.

Jordyn has apologized about the incident on numerous occasions. But her friendship with Kylie ended as a result. Instead, she’s focused on modeling and her business ventures. Back in August, she was spotted with a new tattoo that referenced to the drama.

“What’s meant for me will never miss me,” her tattoo reads.

An insider told Page Six that the tattoo was a reminder for Jordyn to finally move on with her life.

“[Kylie’s birthday] vacation makes it kind of clear that [Kylie and Jordyn] are moving on and doing what they have to do to move on with their lives,” the source said back in July. “It is what it is. The writing’s on the wall.”

Khloe’s Instagram post revealed that she wanted to move on as well. She didn’t want to be filled with so much hate anymore. It looks like these two women have finally made up. Now it’s time for their fans to move on.

What are your thoughts on the ongoing drama involving Jordyn Woods and Khloe? Do you agree that bygones should be bygones? Sound off below in the comments section. Don’t forget to follow TV Shows Ace for the latest Kardashian-Jenner news.

Lifetime’s ‘Left For Dead’ Continues Summer Of Secrets Series
‘Bachelorette’ Preview: Katie Warns Clout-Chasers To Get The Eff Out
Dr. Now Shares A Key Factor In Reversing Obesity: What Is It?
‘Teen Mom 2’: Chelsea Houska Has A New Look And Fans Are Not Happy
‘Days Of Our Lives’ Two Week Ahead Spoilers: Xander Goes Too Far With Dr. Synder – Sets Up Another Salem WhoDunnit