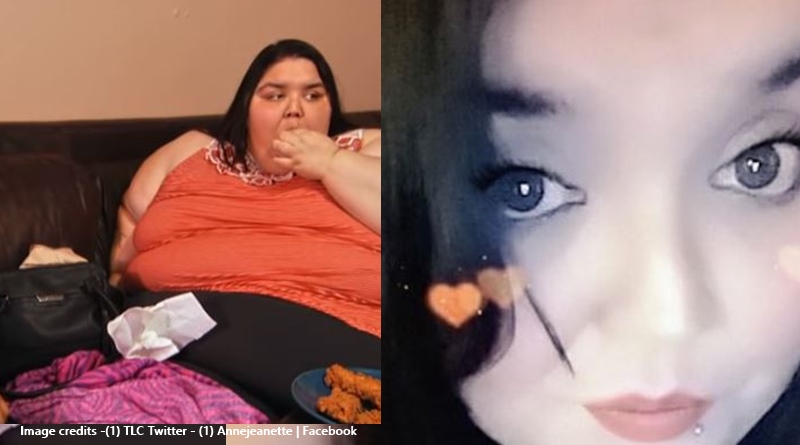 My 600-LB Life fans heard that a new season of the show comes in January. In the meantime, they got treated to a re-run of Annjeannette Whaley’s episode on TLC. Other news is that we’ll see her again in a Where Are They Now? show. Things seem to be looking up for her as she reconciled with Erica and used the hashtag #not600lbsanymore, on a Facebook post.

Fans recall that Annjeanette and Erica went through a bust-up. It came after Annjeanette underwent her surgery for weight loss. Mainly, their issues focussed around how Annjeanette continually hid her bad eating habits from her girlfriend. Ultimately, she managed to lose loads of weight – ending up 274 pounds lighter. But, it seemed that she and Erica were finally over.

Starcasm reminds us, “The 30-year-old San Diego native began her journey at a peak weight of 679 pounds. Her height of five feet, one inch meant she had a BMI of 120. And Annjeannette’s addiction to eating stemmed from being raised by a mother who was addicted to drugs and a father who dealt them.” We’re hoping that we’ll see more of Erica in the upcoming My 600-LB Life: Where Are They Now? show. Apparently, they are now reconciled.

Mindful not to spoil any DNA contract, we seldom see any full-length photos of Annejeanette. But, she posts pictures that show her face and it’s obvious she’s still losing weight. Plus, on December 3, she shared a post that used that #not600lbsanymore hashtag. So, fans can at least be thankful to hear that. And, the reminder of how large she was and how badly she dealt with Erica came in last night’s rerun episode.

One My 600-LB Life follower on Twitter said, “Perhaps you should have included Erica in your goals, Einstein.” Another noted, “Annjeanette is mad because Erica (who was only trying to be a supportive girl friend) is always calling attention to her…Sweetie, you’re over 600 lbs…you’re gonna call attention to yourself regardless!” But, thankfully, it looks like that’s all in the past now.

Wow Annjeanette. After all Erica did for you, you break up with her. #my600lblife pic.twitter.com/WqtOzAZA9Q

Annjeanette returns for Where Are They Now? show – maybe we’ll see more of Erica

According to Starcasm, Annjeanette will return to the Where Are They Now? show. But, we’re not certain how much of Erica we’ll see. We do know that things couldn’t be easy as Erica lives in a different city to Annjeanette. We also don’t yet know when to expect the show’s screening.

What do you think about Annjeanette Whaley using the #not600lbsanymore hashtag and making up with her girlfriend Erica? Sound off your thoughts in the comments below.