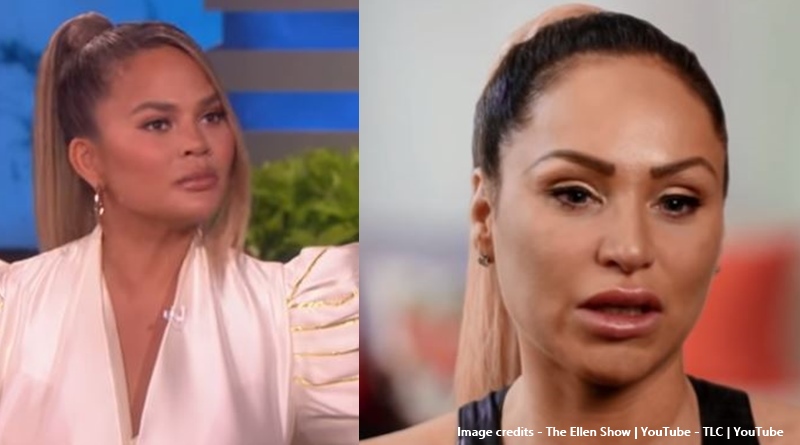 90 Day Fiance picked up a famous fan this year. Both Chrissy Teigen and her husband, John Legend watch the show. Just like other fans, they quickly became addicted to it. Recently, Chrissy shared about the cameo she bought from Zied Hakimi of Before The 90 Days. And, now she got a birthday greeting from her favorite on the show – Darcey Silva. It was gifted to her by her friend, journalist Yashar Ali.

90 Day Fiance – Chrissy Teigen, a famous fan of Darcey Silva, already got a cameo from Zied

Fans of Chrissy Teigen know when she takes something on board, she goes all the way with it. She certainly embraced some stars of the stars in the TLC franchise. In Tim Malcolm’s case – sort of literally. A tweet shared by her other friend Mason showed a photoshopped image of her being embraced by Tim. Previously, TV Shows Ace reported she bought a cameo off Zied Hakimi, and his girl, Rebecca Parrot shared the exciting news.

While Chrissy shared the 90 Day Fiance cameo on her Twitter, the birthday gift probably surpassed it. That’s because Darcey Silva’s her favorite on the show. According to Entertainment Tonight, Darcey’s the only person Chrissy ever asked to allow her a follow on their private social media account. They cited her as saying, “I’ve never requested to follow someone in my life. plz accept me, Darcey?”

In the tweet that Yashar Ali posted for Chrissy’s birthday, they wrote, “Thirty-four years ago today a rascal was born! Happy birthday to my angel (& occasional devil) @chrissyteigen.” Then they reminded us of their close relationship. Yashar added, “You are an amazing friend to all six of us & there is no one else on this earth who could convince me to go to a theme park in a onesie. I love you sweet pea.” Mind you, she also said that Chrissy’s a “dork.” They ended with, “Thank you to the wonderful and sweet @DarceySilva for filming this!

Many 90 Day Fiance fans responded to the birthday cameo by Darcey. One person noted, half-joking, “I’d love to see her on 90 Day fiancé again. But this time we choose a guy for her. She’s [a] perfect candidate for [an] arranged marriage.” Another said, “Oh my heaven @DarceySilva, I love this woman, I loved that she’s [a] hopeless romantic, and I pray that she finds a deserving man. Not that Dutch mess.”

2. Because you are such a dork, I know there is nothing I could get you that would make you as happy as one of your favorite reality show stars wishing you a happy birthday.

Thank you to the wonderful and sweet @DarceySilva for filming this!

No doubt, Chrissy got a huge kick out of her personalized cameo by Darcey Silva from her friend on her B-Day. What do you think about Chrissy Teigen being a huge fan of the franchise? Sound off your thoughts in the comments below.