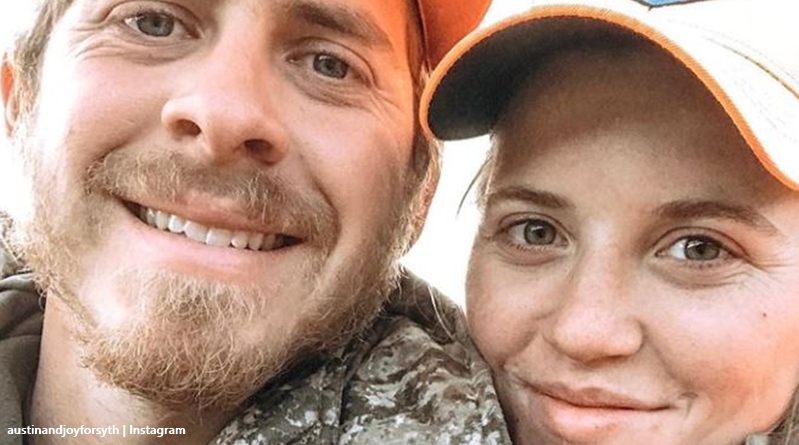 Counting On star Joy-Anna Forsyth left for Texas to celebrate Thanksgiving with her husband Austin. The day before their road trip, she also revealed something fans might not know about Austin. They already heard he’s a qualified EMS medic, and now, we hear he’s got other skills as well.

In September this year, Austin joined the rest of the Duggars who volunteered assistance in the Bahamas. When Austin returned, we noted that Joy-Anna Anna explained about his medic training. We reported, “Austin is the only one with EMT training. In a disaster situation, it might be useful to have the firefighter training that Jana and John David do.” And, now she revealed her multi-talented husband also has other skills we haven’t seen on Counting On.

In her post on Instagram, Joy shared a picture of her, John and Abbie in a plane. She captioned it with, ” Always love getting to spend time with you, @johnandabbie!” She added, “Headed to help a friend do a remodel project… what are y’all doing this weekend?!?” Then she added the new information about Austin, writing, “Fun fact!! Both of our husbands are pilots!!✈️⛅️.”

Fans react to the new skill that Austin has

Cheatsheet also reminded fans about the Duggar passion for pilots. They wrote, “It has long been known that John Duggar, who is married to Abbie Burnett, has his pilot’s license. In an article about how Jim Bob Duggar ensures employment for his Counting On family, we mentioned he’s getting more planes and so it’s useful that not only John flies. Maybe they plan an air service at some time in the future.

Other Counting On Duggars who fly planes

Interestingly, Josiah Duggar also flies. He’s got a helicopter license. In September alarmed neighbors reported seeing him land a helicopter in his yard. At the time, it appeared the Counting On star never actually broke any aviation rules.

What did you think of the reveal by Joy-Anna Duggar that Austin’s got more skills than those of an EMT medic? Did you know he also holds a pilot’s license? Sound off your thoughts in the comment below.

‘Outdaughtered’ Family Heads Out For The Holiday
Jill Dillard 2021 Net Worth: How Much Did She Make From TLC?
Joy-Anna Forsyth Pregnant With Baby #3?! New Photos Fuel Rumors
The Reason Dean Unglert Thinks Caelynn Miller-Keyes Should Propose
Lisa Rinna DRAGGED For Profiting Off Her Mother’s Death