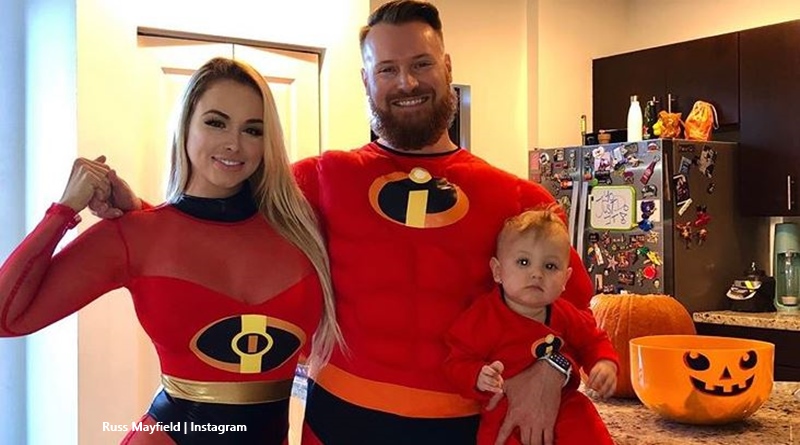 90 Day Fiance couple Russ Mayfield and Paola sometimes take a hit from fans over the way they raise their son Axel. Now, Russ fired back a parent-shamers who accused them of not caring for their son properly in the car. Axel arrived in January 2019, and after nearly a year, Russ believes they know what’s best for their son. He doesn’t take to critics who try and tell them how they should parent their son.

TV Shows Ace reported in June, that Paola even got fans’ disapproval for breastfeeding Axle. Actually, not so much for breastfeeding, but for doing it indiscreetly at the gym.  We noted that her hashtags on an IG post suggested she campaigned “to let breastfeeding become an acceptable social practice.” But, haters will be haters, and eventually fellow 90 Day Fiance co-star Jon Walters stepped in to defend her. Many similar criticisms went their way over the months.

Cheatsheet reminds us that Paola comes from Colombia. She’s a “personal trainer and model.” The couple featured on 90 Day Fiance, Happily Ever After? and more recently, on Pillow Talk. Like many other cast members in the TLC franchise, Russ shared about their Thanksgiving this year. Naturally, detractors always look for a reason to parent-shame Paola, especially as she raises Axel with no meat products. Plus, critics even objected to the haircut they chose for their son. One fan said, “Why did y’all shave his head? His hair was beautiful?” So, he got angry at those parent-shamers who criticized them again during their happy Thanksgiving celebrations.

Russ Mayfield fires back at critics at Thanksgiving

This time, Russ took to his Instagram and told off people who worried about Axel traveling in the car. He pointed out that actually, Axel was strapped in and accused haters of looking for any reason criticize. Noting that his son is his main priority, he let them have it as he’s fed up. Actually, he’s a quieter personality than his wife, who usually fires back. So, the fact that he spoke out shows that he’s really unhappy with 90 Day Fiance trolls.

The TLC shows often bring controversial couples, and suffering from hate seems part of the deal. Actually, Rebecca Parrot of 90 Day Fiance: Before The 90 Days noted on her Instagram that the network warns them to expect hate. But, every now and then, obviously it all gets too much and then they fire back at critics.

What do you think about Russ Mayfield firing back at parent-shamers over thanksgiving? Do you think he’s right and fans just look for things to hate about him and Paola? Sound off your thoughts in the comments below.