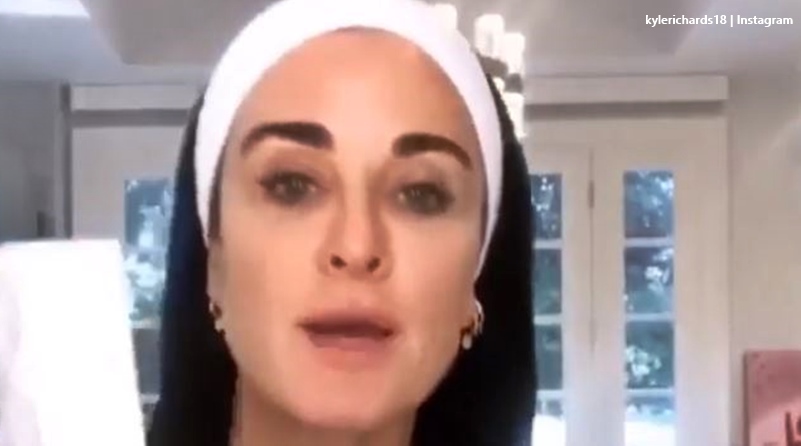 RHOBH fans know that in the last season of the show, Kyle Richards and Lisa Vanderpump ended up at loggerheads. Plus, Dorit and PK turned on her as well. Since then, Kyle and Lisa managed to throw shade at each other, indicating it’s not all over yet. Now it looks like Kyle Richards and Dorit’s husband PK both shaded Lisa on the same Instagram post.

RHOBH – the shade-throwing between Kyle Richards and Lisa Vanderpump

Despite Lisa moving on and leaving the Bravo show, Kyle seems unable to let it all go. Fans of the show recall that Kyle burst into Lisa’s home on her birthday weekend and accused her of lying. It all came about over the scandal involving Dorit’s dog which she adopted from Vanderpump Dogs.  Later, it got handed in to a shelter. The cast accused Lisa of tipping off the media. But, Lisa always maintained her innocence. Kyle accusing her of lying really hurt Lisa. Eventually, her husband asked Kyle to leave their home.

Sniping at each other continues to this day. The latest incident came from Lisa herself. TV Shows Ace reported that it came during the Bravo fan convention. Lisa, now a RHOBH alum, left the function straight afterward and later Kyle claimed it was because Lisa was avoiding her. Well, speaking about that, Lisa said, to People, “We were on different times. I was on with Vanderpump Rules. This is typical of Kyle — she would always sling something at me! How could I run away from her? I’m with Vanderpump Rules…So don’t flatter yourself, sweetie!” Ouch! that was a bit of classy Lisa shade.

Kyle and PK seem to both shade Lisa

This weekend, Kyle shared a photo of herself with Dorit Kemsley and Sutton Stracke. All of them wore crowns. The RHOBH star captioned it with, “If the crown fits, wear it 👑.” Well, fans of the show know that Lisa’s fans call her their “Queen.” Plus, we can recall that Lisa once said, “The crown is heavy, darlings. So just leave it where it belongs.” Following on from that, Erika Jayne mentioned to Andy Cohen that in reality, the real queen of RHOBH is Kyle. She noted, “she is the one we are all connected to, she binds us together.”

On the post that Kyle shared, PK, Dorit’s husband popped up and said, “Clearly wasn’t that heavy …🤣.” Naturally, we can assume that referred to what Lisa said about leaving it “where it belongs.” Well, Lisa’s fans gave it back to him. One said, “meow 🐾 you defo need to be on real husbands of BH. Very catty PK 👎🏻.” Another commented, “you still mentioning it thought you would all be over it by now.” Yet another waded in with, “They’re not wearing a crown. They’re wearing a tiara, only half of what makes up true crown. There’s only one woman in Beverly Hills that stills wears that crown and we all know who that is.😉”

What do you think about PK and Kyle Richards talking about that crown? It sure looks like they shaded Lisa Vanderpump. Sound off your thoughts in the comments below.

Remember to check back with TV Shows Ace often for more news about the cast of RHOBH.

Did Popular Gossip Site Reveal Netflix’s ‘The Witcher’ Season 2 Premiere Date?
‘Fat Amy’ Is Out, Amy Halterman Identifies As Skinny Now: See Photos
Jeff Kober Talks ‘General Hospital’ Exit: ‘Thank You For Hating Me’
Is Lifetime’s ‘Secrets Of A Marine’s Wife’ Based On A True Story?
‘Autopsy: The Last Hours of Frank Sinatra’ Where To See, What To Expect