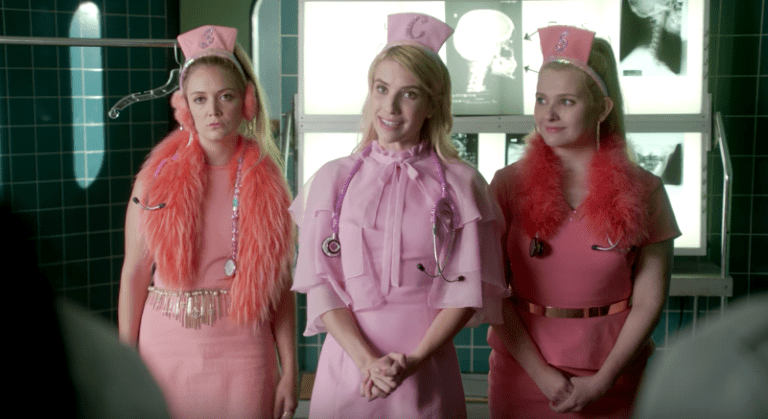 Is a Scream Queens reboot in the works? According to Ryan Murphy, it could very well happen. There’s no secret that Ryan Murphy has changed pop culture and television with his popular shows like American Crime Story, American Horror Story, Glee, Popular, and Pose. In addition, Murphy’s new Netflix series, The Politician, has landed him a $300 million dollar deal with the platform.

Fans are interested to see where his imagination will take him next. Murphy may be going back to one of his former projects. He’s interested in revisiting the Scream Queens story. He teased that a Scream Queens Season 3 show could happen. Scream Queen fans were distraught when their beloved show only lasted two seasons.

Scream Queens was canceled by Fox despite its cult following. For chairman Gary Newman said that the reason for the sudden cancellation was because it felt “as if it was a complete series,” according to Showbiz CheatSheet. There was no interest for the network to continue and “tell more stories.” But, according to Murphy, there are plenty more stories to tell.

Murphy took to Instagram to tease a possible reboot for the horror-comedy. In a recent Instagram post, Murphy said that fans have been asking him about revisiting or continuing Scream Queens. He also revealed that he’s been in talks with most of the cast about coming back for Season 3.

So many people recently have been asking me about rebooting or continuing SCREAM QUEENS (RIP, taken too soon). Emma, Billie, Lea and I have mused on it, but question: should it be a six episode limited? A catch up movie? Who should I bring back? Would love your thoughts. So many questions….

But that doesn’t mean a Scream Queens reboot is going to happen anytime soon. According to Fox Entertainment CEO Charlie Collier, the network isn’t fully on board with the revival.

“There are no plans right now on Scream Queens,” Collier told Deadline and then added, “We take Ryan Murphy seriously when he wants to build something.”

Cast of ‘Scream Queens’ on board for a revival

According to Murphy, the cast of Scream Queens is all in on a possible revival. During his interview with Deadline, Murphy said that decision is up to Fox, but that the rest of the cast is already ready to start filming Season 3.

Murphy said that this decision also up to the fans. He’s well aware how popular the series is. From the moment Scream Queens dropped on Hulu, it increased in popularity once again. Murphy has asked the fans to write to Fox Studios and say that they want the show back.

So, let us know your thoughts. What do you think of a Scream Queens reboot? Share your thoughts below in the comments section and follow TV Shows Ace for more TV news.