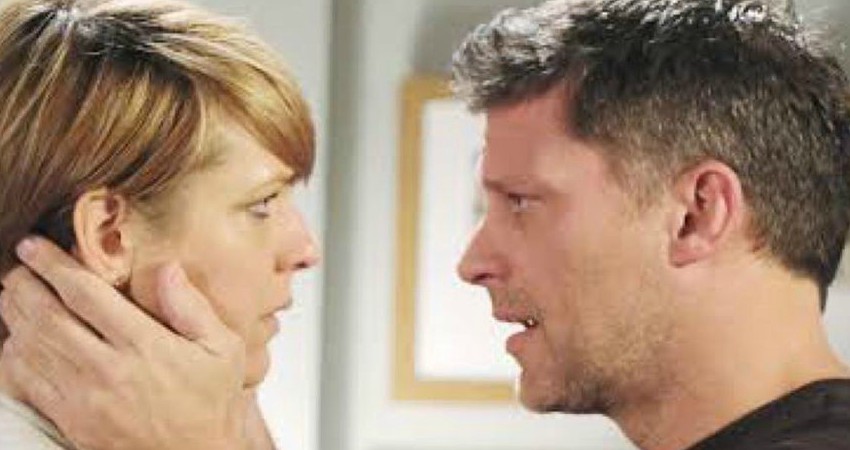 Days of Our Lives fans are ready to watch Salemites count their blessings. Spoilers reveal viewers can expect more time-jump explanations and shocking twists. Last week we found out that Kayla (Mary Beth Evans) is in a romance with Justin (Wally Kurth) after Adrienne’s (Judi Evans) untimely death. Someone from Kayla’s past will return to Salem this week.

As viewers know, Chad (Billy Flynn) has been in contact with his father, Stefano DiMeria (last played by the late Joseph Mascolo.) Abigail (Kate Mansi) encourages her hubby to set up a face-to-face meeting with Stefano.

Spoilers indicate that the meeting between father and son doesn’t go as he expected. Rumors suggest that Dr. Rolf (William Utay) is brainwashing Steve Johnson (Stephen Nichols) into thinking he’s Stefano. Steve is the man from Kayla’s past returning to the canvas later this week.

Princess Gina (Kristian Alfonso) has been secretly working on a painting for weeks now. She finishes her final touches and reveals the subject of her painting. Marlena (Deidre Hall) receives a gift from a secret admirer. As fans know, Stefano has an obsession with his “Queen of the Night.” Is Stefano really back or is it another mind-control twist?

However, baby Mickey is briefly kidnapped and her real paternity comes out. Who spills the beans? When Eric proposes to Nicole, she feels so guilty that she confesses the baby daddy switcharoo. Will he forgive her and Sarah for their deception?

Haley’s Cause of Death Revealed

Adrienne wasn’t the only DOOL casualty of the one-year jump into the future. JJ’s (Casey Moss) girlfriend, Haley Chen (Thia Megia) was also murdered. However, her cause of death hasn’t been revealed on the soap… until now.

JJ vows revenge on Kristen DiMeria (Stacy Haiduk) for pushing Haley down the stairs and causing her death. Was Haley’s death an accident or Kristen’s attempt to cover something else up? Something to do with baby Mickey, perhaps?

Eve Celebrates Thanksgiving with an Unexpected Person on DOOL

It’s safe to say that Eve (Kassie DePavia) is not enjoying her time in prison after being wrongly accused of pushing Jennifer (Melissa Reeves) off a balcony. (Princess Gina is the real culprit.)

To make matters worse, Eve befriended by Hattie (also Deidre Hall) in prison. She’s forced to spend the Thanksgiving holiday with the Marlena-lookalike. Will the duo join forces to prove Eve’s innocence?

Days Of Our Lives Renewed for Season 56

NBC announced that Days of Our Lives WILL be back for their 56th season in late 2020. The news comes a week after rumored cancellation. TV Shows Ace has the scoop on what the prolonged production break and how the cast refuted the rumors.